The Seven Secrets of Bologna

Bologna, with its medieval city centre, dark portico galleries, and large student population is the perfect recipe for a mysterious getaway. Any visitor to Bologna who spends any time with the local Bolognesi will hear about seven secret sights hidden around the city. At risk of being shuffled off this mortal coil, some dark night, by the guardians of the secrets, TMO is prepared to reveal these fun esoteric sights scattered around the capital of Emilia Romagna – which taken together give a great historical tour of the city.

Whispering in the Archway of Palazzo Podestá 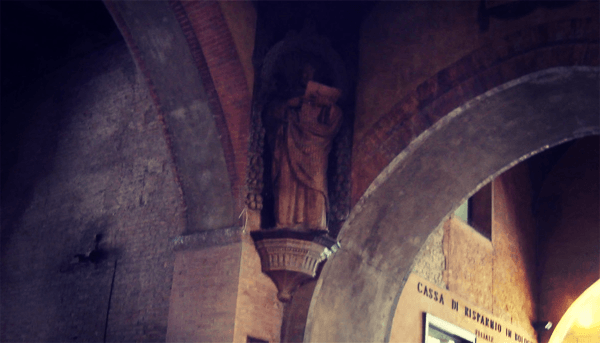 From Piazza Maggiore, turn your back on San Petronio, and head into the archway in the middle of Palazzo Podestá. In the arch, go to the right hand corner, whilst sending a friend to the diagonally opposite corner. Whisper into the wall, and amidst the hustle and bustle of the city centre, your friend will hear you clear as day. Tradition holds that this was a place which allowed lepers to confess their sins during the middle ages.

Bologna’s most famous statue, that of the God Neptune in Piazza Nettuno, is the stage for the second of Bologna’s seven secrets. You’ll need to stand in just the right spot, diagonally behind his right arse-cheek, if we want to get technical. It’s said that the statue’s sculptor, Giambologna offended by the instruction to reduce Neptune’s virility, designed Neptune’s outstretched finger deliberately so that, when viewed from a certain angle, it restored the God’s dignity. Whether intentional or not, the effect certainly exists, and has made many of the less-pure-minded visitors to the city chuckle when they discover it.

A stone’s throw away from Neptune, on Via Indipendenza (on the right hand side), on the roof of the portico, if you look up you’ll see the strange inscription panis vita, canabis protectio, vinum laetitia, roughly translating as ‘Bread is life, Canabis protection, wine happiness’. This is a nod to Bologna’s past, rather than any of its current student-type activities. Cannabis as a crop was an important part of the city’s wealth for centuries, as Emilia-Romagna was one of the main centres of cultivation for this versatile plant – used mainly in textiles and for rope-making. Nowadays, while widely available in the city, cannabis is illegal in Italy – so watch out!

The Broken Vase at the top of the Asinelli Tower

The Asinelli tower, alongside the leaning shorter Garisenda tower, dominate Bologna’s skyline – you’ll find them at the end of Via Rizzoli. A climb up to the top of the Asinelli tower is an arduous task, but well worth it for the views of the city that it provides. In addition, it’s the location of our next secret sight. There’s a broken vase – not much of a sight, to be fair, but this symbol attests to the Bolognese ability to settle conflicts and disputes, one of its main strengths over the centuries, and one that helped it become such a prosperous city. There’s also a tradition here that climbing the tower for those who have yet to graduate, will bring bad luck. There are plenty of these traditions around the univeristy town – for example, crossing the courtyard that you find half-way down Via Zamboni, in the University zone, is said to have the same effect.

The Arrows in Corte degli Isolani

From the towers, you should now head down Strada Maggiore towards the Corte degli Isolani, nowadays an upmarket shopping gallery, which leads through from Strada Maggiore through to Piazza Santo Stefano. Outside the Corte degli Isolani, you should cast your gaze up to the ceiling above the street. Look carefully on the wooden rafters, and you’ll be able to make out (if you have good eyesight) three lodged arrows from centuries past. The legend dictates that three villains were about to shoot a local merchant, but they were all distracted by the appearance of a shapely and undressed maid at one of the windows. The arrows were let loose, but failed to hit their target, and another brick was added to the legend of the Italian playboy!

The next secret you’ll find walking out from the University zone, through Via Oberdan, turning left onto Via delle Ocche, and right onto Via Piella, where you’ll see the above window onto the now disused and hidden canals of Bologna – this one, the Canale delle Moline is a continuation of the Canale di Reno. At one stage these canals were hugely important to this industrial city – they were used to move merchandise, and there was even an area of the city that was essentially a port (the area around the current via riva di reno). From the start of the 19th century through to the post-war re-construction, these canals were largely blocked up and replaced by roads. There are though still a large number of underground water passageways, and you can even organise a trip through them.

Panum Resis in the University

The final secret is perhaps the least interesting, but most enigmatic. Apparently, inscribed into one of the historic tables in the University, in Via Zamboni, is the latin phrase panum resis. Use Google’s translator for Latin and you’ll get ‘Loaves of Resistance’ – most guides though suggest that the phrase means knowledge as the basis for any decision. More enigmatic than the text itself is its precise location – after checking with many, many graduates of the famous Alma Mater Studiorum, the world’s oldest continuously functioning university, none have been able to confirm the existence or location of this final secret – so happy hunting!