Bologna has plenty of sights to see, things to do, and restaurants to visit, but it’s also increasingly being used by tourists as a base to explore Northern Italy. Indeed with improvements to the rail connections, including the high speed train line that connects Milan – Bologna – Florence – Rome and Napoli, you can certainly factor in at least one day trip away when visiting the city. Obviously destinations depend upon how much effort / energy you want to spend – you could in theory visit Rome in a day from Bologna, but that would be stretching things insanely thin – so we’ve limited ourselves to some of the nearby cities. Mind you, given that Emilia-Romagna itself has tons of historic art cities, and Tuscanny is just across the Appenine mountains, that’s not much of a limit!

Florence has long cornered the market in tourism to Northern Italy – it’s a must see for its combination of stunning renaissance art and architecture, food and culture. Having said that, many tourists come back with tales of woe from the Tuscan capital precisely because it is so touristy. Finding a good place to stay, and a decent place to eat, without being fleeced is not always easy. The small city is also packed with camera clicking tourists from every corner of the globe. Because of that, the savvy traveller will base herself in Bologna, just 37 minutes away from Firenze’s Santa Maria Novella station. You can get a train in the morning, see many of the sights, and return in time for a great plate of Tagliatelle al ragú in the evening.

Uffizi Art Gallery, The Duomo, The Ponte Vecchio, visit fiesole in the hills above Florence

Ferrara, just 20-30 minutes away from Bologna, is an amazing and often overlooked city. It’s very small – population roughly 132,000 – but has an illustrious past, an easily managed city centre (largely pedestrianised), and regularly comes up in the top position for ‘best place to live in Italy’. It is itself declared a UNESCO World Heritage Site. It has an amazing castle (perhaps best viewed at New Year’s Eve, when there are fantastic firework displays), beautiful squares, and a spectacular cathedral. Add to that the fact that the food is great (try the tortelli di zucca – pumpkin ravioli, in the autumn), and it plays host to major open air concerts in its main square, and you have an amazing and non-exhausting day trip away from Bologna. 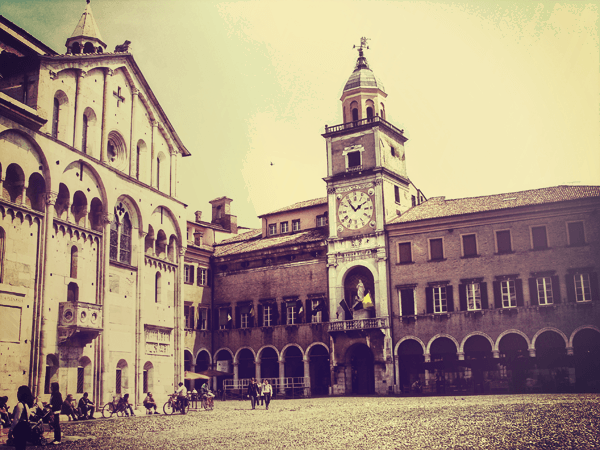 Modena is perhaps Bologna’s greatest local rival, though the city is considerably smaller; ask someone from Bologna if it’s worth visiting, and they’ll probably dissuade you, but in reality there’s plenty of good things to see in this nearby city – whose most famous son was Luciano Pavorotti. The city has a wonderful main square, a fantastic cathedral, and plenty of lovely shady streets to stroll through. It’s also home to two important gastronomic treats – the famous Balsamic Vinegar, and Lambrusco wine (which, be warned, is a fizzy red wine). It’s also home to the Ferrari Museum (outside of Modena)

Once Milan was a bit of a trek from Bologna, but now with the opening of the Milan-Rome-Napoli high speed train line it’s just one hour by train – in fact lots of people commute for work from Bologna to Milan, finding the living standards in Bologna better than the hectic capital of Lombardy. Milan is a big city – and a business and cultural hub, so you’re guaranteed great art exhibitions, concerts etc. Add to that one of Italy’s most important tourist attractions, Leonardo Da Vinci’s Last Supper, and you have a great day trip.