10 of the best hotels in Bologna City Centre

There are loads of hotels in Bologna’s city centre – of differing quality, convenience and reputation. For years Bologna has, wrongly, been considered simply a travel hub rather than a place to visit in its own right, and because of its extensive road and railway network there are lots of top class hotels outside the city centre; our advice, though, is always to choose one of the many hotels in Bologna’s city centre, so that you can wander around on foot (the city centre is extremely compact), and fully appreciate the charm of this historic and charming city.

Having said that, there are a number of caveats. If you’re driving, Bologna city centre can be very problematic, as it has an aggressive traffic-limited-zone, lots of one-way streets, and lots of sidestreets that may well be charming on foot, but in a car can fray the nerves of the most experienced drivers. Parking is often a problem as well, so be sure to check with your hotel to see if a) it’s easily accessed by car, and b) whether there’s parking offered.

A good solution, if Bologna is just one of your stops on a trip around Italy, is to either arrive by train, or organise to hire a car when leaving from either Marconi Airport or the Train / Bus stations. Bologna has a good public transport system, and there’s no real need for a car when staying in the city centre.

With the caveats dispensed, here is our list of ten of the best hotels in Bologna City Centre.

The Royal Hotel Carlton, a four star hotel with 240 rooms, is well situated to get over the problem of car parking, in the city centre but still easily accessed and with free parking. The hotel is part of the Monrif group, and offers high quality en-suite rooms with free wi-fi and flat-screen satellite TV. There is a health and wellness centre with Turkish Baths, Sauna, and various treatments on offer. Rooms are also available with hydromassage units and balconies. The Royal Carlton is just 300m from Bologna’s Train Station, and is very close to the Mambo Museum

The Metropolitan Hotel has a great city centre location. This good-value 3 star hotel is just around the corner from Via Independenza, the city’s main shopping street. It has 45 rooms offering modern accommodation with a stylish Oriental twist. The Hotel can arrange private parking in a nearby facility, though at an extra charge. The hotel gets great reviews and offers plenty of services including babysitting/child minding and a sun terrace.

The Starhotels Excelsior dominates the skyline in front of Bologna’s Train Station. If you’re looking to stay close to the train station, with four star luxury, then this is the place for you. It’s a modern, bustling hotel with a gourmet restaurant and a free gym. If you don’t need the stars or the location, you can find other hotels with a more Bolognese character, but this is always a popular choice with travellers visiting via train/bus. There is parking, but it may involve an extra charge. 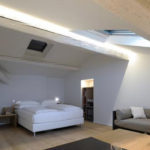 I Portici is one of Bologna’s newer four star hotels, and is located on it’s main shopping street (albeit at the train-station end). It’s a stylish looking hotel that blends into the famous porticoes of Bologna and the Montagnola Park. Walk out its doors and within a ten minute walk you’re in Piazza Maggiore. The hotel features a bar and a Michelin-starred bistro restaurant, both with beautiful views along with 89 comfortable and stylish rooms.

The Art Hotel Orologio is a charming hotel right in the heart of the city centre. It takes its name from the city’s clock tower (Orologio in Italian) which it overlooks. It is in the pedestrian area of the city centre, though paid parking can be arranged nearby. This is a great hotel to stay in if you want to stroll the city centre streets and find great restaurants and bars nearby.

With themed rooms (ranging from the typewriter room through to the American Icon Junior Suite), and situated on a site that has hosted a hotel since the 1300s, the Al Capello Rosso hotel is both one of Bologna’s most modern and traditional hotels. The four start hotel is located in the heart of the city centre just 50 metres from Piazza Maggiore, and has 33 rooms and the Osteria del Cappello restaurant. Highly recommended for an unforgettable stay in Bologna’s city centre. 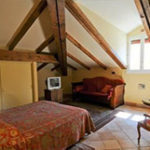 The beating heart of Bologna’s city centre is the market area of the Quadrilatero, crammed with food shops, market stalls, and small bars and restaurants. The Albergo delle Drapperie is a charming hotel right in the heart of the Quadrilatero. With three stars and 21 rooms, the hotel offers brilliant value for a super-central location. As with most of the hotels in this selection, the hotel has no parking, but can arrange paid parking nearby.

The Best Western Hotel San Donato has one of the best locations in the city, tucked in between the University zone of Via Zamboni, the Jewish Ghetto, and Bologna’s Two Towers. This four star hotel has a classic design, rooms with wooden furniture and tiled floors. All are air-conditioned, and also feature a flat-screen TV with satellite channels, a fridge, and an electric kettle. The downside is there is no parking – contact them to see if any can be arranged. 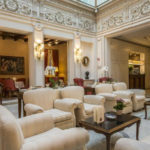 This four-star hotel, the Corona d’Oro (Crown of Gold), located in the central Via Oberdan (which has lots of great restaurants nearby) is a historic art hotel, and offers 40 rooms in a restored 13th century building. Rooms are elegant, clean and comfortable and include free wired and Wi-Fi access, satellite TV and minibar. Some rooms overlook the Towers. 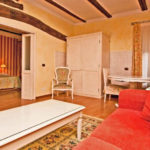 The Hotel Porta San Mamolo is one of TMO’s favourite hotels in Bologna. Situated in a quiet street just within the city walls, this charming three star hotel with garden punches well above its weight. The rooms are modern; some have terraces with city views or a private entrance from the garden. All are very comfortable, with Wi-Fi access and satelliteTV. Without doubt one of the best hotels in the city.