Bologna’s Piazza Maggiore is a magnificent square, in the heart of this important Italian city. Bologna is characterised by its porticos, so Piazza Maggiore – along with its adjoining Piazza Nettuno – is one of the few large open spaces that you encounter in Bologna’s city centre. It’s a natural meeting place – the Bolognese congregate there for special occasions and events – the piazza often hosts concerts, political rallies. As such, it’s been the scene for a number of famous historical events – we bring you just some of them below.

1530 – The Coronation of Emporor Charles V 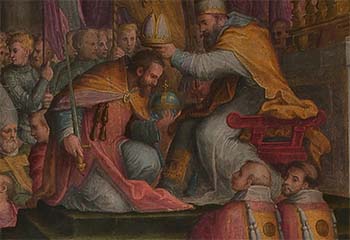 On the 24th of February, 1530, Charles V was crowned Holy Roman Emporor, by Pope Clement VII – an unusual event, given that general tradition dictated that the coronation should take place in Rome (though coronations had taken place in Ravenna, Monza and Reims). The event was arguably the most important ceremonial event of the 16th Century, and for a number of months Bologna could lay claim to being the centre of the Christian world (both the Emporor and the Pope came to Bologna months prior to the occasion). Why was Bologna chosen for the coronation? After sacking of Rome in 1527, by Charles’ troops made a coronation there problematic, to say the least. Bologna was the 2nd most important city of the Papal States, with its huge and imposing Basilica of San Petronio, so it made sense from a Papal point of view. Charles V though was the man in charge, having subdued forces opposing him in Northern Italy, and effectively bringing Clement VII to hell, it made symbolic sense for the Emporor to have the Pope travel Northwards to meet him. Bologna was ideally placed to meet the needs of both these cunning and powerful men. And so, for days in February of 1530, the city was treated to a huge feast, with fountains in Piazza Maggiore distributing wine, and a gigantic free feast offered to the citizens.

In 1256 Piazza Maggiore was host to an important event. The Podestá – or head of the city – Bonaccorso da Soresina declared the end to serfdom, and the freeing of serfs in areas controlled by the city. This important act was codified in the publication of an act called Paradisum voluptatis. The Liber Paradisus, or Heaven book (because its first word, Paradisus, is heaven) is kept in the state archives in Piazza dei Celestini, and marks one of the earliest official acts abolishing slavery.

In may of 1860 Bologna welcomed Vittorio Emanuele II, the King of Sardinia-Piedmont leading the movement for Italian Unification. Vittorio Emanuele II would later be crowned the first king of Italy. Bologna during the 1850s had been occupied by Austrian Troops, though nominally it was still a part of the Papal States. The Bolognese wanted neither Austrian or Papal control, and so in 1859 when Garibaldi, the romantic architect of Italian unification visited the city clandestinely, he was recognised and greeted warmly by the whole city. A year later Vittorio Emanuele II entered the city, and Piazza Maggiore was renamed Piazza Vittorio Emanuele II. In 1884 a statue of the king on horseback was placed in the centre of the Piazza. The statue was moved, post-war, when the House of Savoy fell into serious disrupte. It can now be seen at the entrance of the Giardini Margherita park. It was in 1946 that Piazza Vittorio Emanuele II became named Piazza Maggiore officially.

The Clash play in Piazza Maggiore – 1980

The day that the Clash played in Bologna’s main square is legendary – to the point that you’ll hear all sorts of stories about it, most of which are confused or fantasy. For example, I’ve met more than one person who’ll tell you that the concert was an act of solidarity by the left-wing punk band for the victims of the Bologna Bombing – though the attack happened months after the concert; there are others that will swear that Joe Strummer wore a t-shirt with the logo of the left-wing terrorist group the Brigatte Rosse [he didn’t. He had worn one at concerts in London in 1978, but by the time he played in Bologna he’d distanced himself from violent groups like the BR, IRA, and Red Army Faction]. That’s not to say that the concert wasn’t a truly special occasion, with plenty of drama of its own. In theory the concert was organised by the local administration (dominated by the PCI – the Italian Comunist Party), celebrating their success in the local administrative elections; in reality the concert was just one of a number of initiatives undertaken to reach out to the city’s youth and student population. Just a few years earlier, in 1977 (no coincidence that this was the year of punk), a student protest movement swept Italy, with much of its focus in Bologna, where in March of that year a 25 year old protester, Francesco Lorusso was shot dead by police. In the rioting that followed, the Government sent in tanks and armoured vehicles to quell unrest. The Clash concert, was, in part, an attempt to reach out to the still dissaffected youth of the city.

The concert itself was a game of two halves. The Clash were late to take to the stage, awaiting the arrival of drummer Topper Headon – who had been delayed in traffic on the way from the South of France. The group in fact took to the stage with a local drummer filling in for Headon, with less than impressive results. Half way through the concert, though Headon arrived and things picked up. Strummer spent the night, after the concert, wandering the streets of Bologna chatting to fans. The importance of the band, and in particular Strummer, was recognised a couple of years ago when the Parco Nord Arena was re-named the Joe Strummer Arena.

On the 2nd of August, 1980 Bologna was the scene of one of the most horrific terrorist attacks in modern European history – the Bologna Train Station Bombing. 2 days later Piazza Maggiore was where the city came together, to show a dignified and unified front against terrorism, with 30-40,000 people filling the piazza. The crowds were even larger two days later, spilling over into Via Indipendenza and Via Rizzoli, as the state funerals were celebrated for the victims. Each year, on the 2nd of August, Bologna remembers its victims, with a procession from Piazza Maggiore to the train station, and with a special concert in the Piazza.