The Sala Borsa – a cultural oasis

Bologna’s Sala Borsa, the old city stock exchange, is a must see, in part because of its art nouveau architecture, in part because of its roman ruins in the basement, and in part simply because it’s a buzzing cultural hotspot of the city, with exhibitions, the main library, coffee shop (and bathroom and baby-changing facilities) and Bologna’s innovative Urban Centre.

Before entering, take a moment to admire the tribute photos to Bologna’s resistance to fascism during the war. To the left of the Sala Borsa entrance, extending to the corner is the Sacrario Piazza Nettuno. This monument sprang to life spontaneously in 1945, with the liberation of the city from Nazi-Fascist forces; relatives and friends of resistance members (i partigiani or partisans) who had been executed, in this corner of the square, during the war years, started leaving photos and flowers in their memory. Now it is a permanent memorial to the city’s strong anti-fascist identity.

The Sala Borsa – A Brief History

In 1568, the legendary botanist Ulisse Aldrovandi (a fascinating figure and one of the leading scientific minds of his generation) managed to convince the Bologna authorities to set aside the space where the Sala Borsa currently stands as a public orchard, where plants could be grown for the University’s botancal department. It took over from an initial private garden, the viridarium, established by the Papal legate Androino de la Roche in the 1300s. 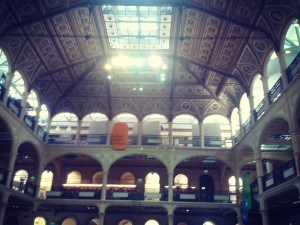 Before its use as a garden, public and private, the space where the Sala Borsa now stands had always been at the centre of Bologna and Bolognese life. Excavations have found remains from the 7th Century BC Villanovan culture, followed by the Etruscans, and through to the Roman time of Bononia (the Romans in their expansion across the Po river plain conquered the celtic city of Bononia). Amazingly, as you walk through the grand main hall of the Sala Borsa,if you look down there is a glass pavement that allows you to glimpse into these centuries of history with preserved remains under your feet.

Between 1883-1886 the current structure took place, built with lage quantities of cast iron and glass, a modern building for a booming industrious local economy, resembling the other grand buildings of the day, the Galleria Umberto I in Napoli e the Galleria di Corso Vittorio Emanuele II in Milan. The boom wasn’t to last though, and the Sala Borsa‘s initial lifespan finished with a depressing closure in 1903.

After the war, with the return of a modicum of economic growth, the Sala Borsa was expanded and the stock market was re-opened in 1926 by the Finance Minister Count Volpi di Misurata.

After the second world war, the Sala Borsa by day remained a centre for commercial trading, while in the evening it was transformed into a public sports hall, where basketball matches were played, and boxing matches held.

Finally, this fascinating building, was converted into its current role as a multimedia library and public conference centre in 2001.

The Sala Borsa is an ideal place to meet people in the city centre – it’s central indoor hall is like a public piazza but with a roof! It’s cool in the blisteringly hot summer months, and warm and dry during the winter. It has a decent cafe and lots of seating, but more than that it has temporary exhibtions and lots, and lots of books – in various languages.

Go to the second floor and you’ll be able to read the latest newspapers and magazines, or even sit down and watch a video from the extensive film/documentary collection. Visitors can avail of all these amenities though you’ll need a library card (tessera) if you want to take any books/films out on loan.

Visiting the Ruins in the Sala Borsa 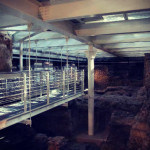 You can visit the various ruins on which the Sala Borsa has been built, either on your own or accompanied by a guide from the Library. The guided tours need to be booked in advance as places are limited. You can book at the information desk in the main hall. Check directly for visiting hours, as these change.