This Adoration of the Magi is not found in the gospel of St. Luke, but in that of St. Matthew, where the magi are described as ‘men from the east who studied stars’. (Matthew 2:1-12). Their arrival is discovered by Herod who questions them, telling them that he wishes to pay homage to the new born king. Guided by a star, they find the Christ Child and present him with gifts of gold, frankincense and myrrh. They are then warned by an angel not to return to Herod and they go home to their countries by a different route. The number of Magi is not given, but the three gifts led early commentators to believe that the number was three. In very early depictions, such as the mosaics

in S. Maria Maggiore, only two Magi approach the child with gifts.

It was not until the later middle ages that the magi were seen as kings, and in early depictions, such as the mosaics in S. Apollinare, Ravenna, they are depicted as travellers wearing eastern hats.

The legend of the Magi grew in the Middle Ages. The Dream of the Magi is shown in this twelfth-century stone sculpture from a pier in the cathedral of Autun by the sculptor Gislebertus: 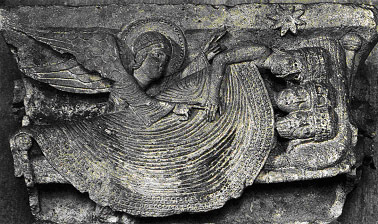 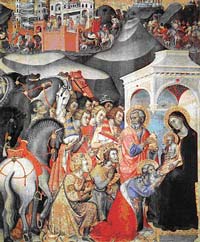 The Sienese artist Bartolo di Fredi crammed his painting with detail and demonstrates his skill in foreshortening with his handling of the horses in the left. Just like a popular preacher, Bartolo included local detail in his painting to make the religious narrative appear more real to the viewer. He did this by inserting the clearly recognizable city of Siena in the background, with its black and white striped marble buildings and rose red walls. 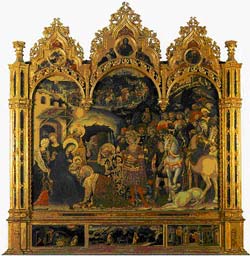 The Adoration of the Magi was very popular in medieval and Renaissance Florence. One of the reasons for this was that it justified the appropriate use of wealth. Christ receives gifts of gold, frankincense and myrrh, thus symbolizing appropriate benefactions and donations to the Church, his body on earth, and, importantly for a mercantile society, it demonstrated a role for the wealthy within a Christian narrative that glorified the humble and the poor. There was another reason why the scene was popular in There was another reason why the scene was popular in Florence. It was celebrated as a public festival there, not annually, due to the large costs involved, but every five years. A procession would wind its way through the city, with prominent individuals playing the parts of the kings. This was to become extremely important to the Medici (1434 onwards) who manipulated civic ritual to promote their own identity, but existed in Florence since 1390 at least.

It was painted in 1423 for the chapel of Palla Strozzi – at that time considered to be the wealthiest man in Florence – in the church of Santa Trinita.. The panel is a showcase of the style known as International Gothic – International because it was found all over Europe, from Burgundy and England to Bohemia and Florence, and Gothic because it shared stylized, unnatural characteristics with late Gothic art and ignored much of the more realistic features of Giotto’s painting. However, what often distinguished International Gothic from ‘Gothic’ was an attention to realistic elements in detail – seen here in the foreshortening of the horses in the Magi’s retinue and the attention given to the different types of light in the Adoration scene in the panel below: the supernatural light emanating from the Christ Child, and the natural light of the moon in what is often said, erroneously, to be the first night-time scene in the history of art. Another feature of International Gothic is the attention given to the exotic – here we find monkeys, camels, leopards and other animals in the rich retinue of the Magi.

The main scene of the altarpiece is the Adoration of the Magi, but Gentile inserts other important elements of the Christmas narrative. The Annunciation is found in the spandrels: Gabriel in a roundel to the left, the Annunciate Virgin to the right, and Christ the Redeemer, the word made flesh, in the centre. In the predella panel below we can see the Adoration of the Child, then, in the long central predella panel, the Flight into Egypt, and then the Presentation in the Temple.

In this beautiful predella panel from Gentile’s Adoration of the Magi we can see Joseph leading the Virgin and Child into Egypt, followed by the two maids (or midwives?). The fruit trees may allude to the legend that on the third day, Mary, tired, sees fruit and asks Joseph to gather it for her, but it is too high out of reach. He is also preoccupied by the lack of water. Jesus smiles and asks the palm tree to give fruit to his mother, and asks the tree to reveal the hidden vein of water which nourishes it. The same legend tells of the family’s sojourn in the desert and of their meeting with Saints Elizabeth, Zacharias and the child John the Baptist.

The Medicean appropriation of the Magi festival is best seen in the famous frescoes by Benozzo Gozzoli, commissioned by Piero de’ Medici for the family chapel in the Palazzo in Florence.

The narrative of the three kings is spread over the entire chapel and contains many references to the Council of Florence of 1439 which saw the short-lived union of the Eastern and Western churches. Cosimo de’ Medici had been instrumental, through both his money and his diplomacy, in relocating the council from Ferrara to Florence and the pictorial association of the festival of the Magi, by 1459 a vehicle for Medicean pomp and symbolism, and the Council would have seemed particularly appropriate for a chapel in the family palace. 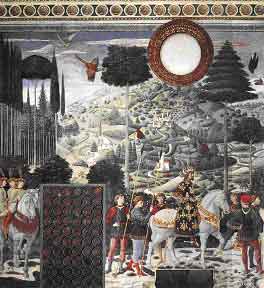 The scenes have often been seen as more secular than religious in character, and they appear to contain many portraits, not only of the Medici family and their supporters, but also of Gozzoli himself, and key personalities at the Council of Florence, such as the Byzantine Emperor John Palaeologus and the Greek Patriarch Joseph who died during the council. 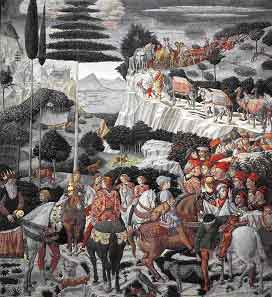 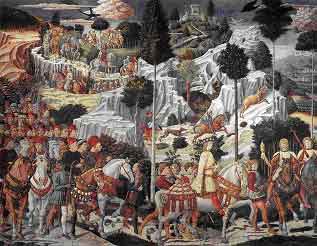 The narrative culminates at the altarpiece, which was by Filippo Lippi; the altarpiece itself is now in Berlin, but a copy exists in the chapel.

This painting could be described as devotional rather than narrative, in that it shows a scene which is not historical in time – neither John the Baptist nor the monk saint (probably Saint Bernard) were present at the Nativity – but rather invites the viewer to transgress time and join in adoring the Christ Child like the Virgin and saints. The picture is often said to express the Western view of the Holy Spirit, that is, that it emanates from the Father and Son, rather than the Eastern view, that it emanates from the Father alone. This was one of the many controversial subjects discussed at the Council of Florence. However, it can also be seen that the Christ Child is at the crossing of two trinities; a spiritual vertical one, composed of himself, the dove of the Holy Spirit and the figure of God the Father, and a fleshly horizontal earthly one, composed of himself, his cousin John the Baptist, and his mother, Mary.

The painter also reminds the viewer of what the central message of redemption is: the naked, vulnerable Child will die for the sins of mankind and be consumed in the Eucharist. The botanical details are rendered with precision, the red flowers are five petalled, indicating the five wounds of the Passion. The Virgin’s face is melancholy, as she knows the fate of her child. Saint John the Baptist is the prophet of the New Testament who points out the way to the redeemer. The nimbus of the child bears the cross on which he will be crucified.