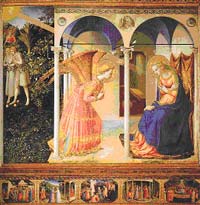 It is fitting to start this account with this image, as in many ways, it shows the start of the Christmas story. It was painted by Fra Angelico (c.1390-1455) a Dominican friar, probably for the Dominican house of San Domenico in Fiesole, near Florence. It was bought in 1612 for the Duke of Lerma’s chapel in the Dominican church of Valladolid in Spain where it remained until its acquisition by the Prado.

Angelico shows us not only the moment of Christ’s Incarnation in the Annunciation scene, but the very reason for it, by painting the Expulsion from the Garden of Eden in the left background. An angel ushers Adam and Eve out of a lush garden, rendered almost like a tapestry. The couple are wearing clothes so the moment of shame – linked to consciousness of their nakedness and sin – has happened. However, the most important part of the painting is clearly the foreground, where Gabriel announces to Mary that she will conceive and bear a child and she replies with humility ‘behold the handmaid of the Lord’. Mary’s acceptance of her role in the salvation of mankind, and Christ’s taking on her human flesh is crucial in the history of redemption and also in Eucharistic terms. The body of Christ, consumed in the Eucharist, is a human, fleshly body which was sacrificed on the cross for the sins of mankind. This difficult doctrinal message had to be rendered pictorially in a clear and readable fashion. Angelico places the Annunciation in an architectural setting of a Renaissance loggia, very similar to the loggie and cloisters of his own convent of San Marco, designed by his contemporary, Michelozzo (1396-1472). A shaft of golden light falls from the left bearing the dove of the Holy Spirit. Mary is seated with her hands crossed over her chest, an open book on her knee. The open book symbolises the Word, which is being made flesh at that moment, and also recalls the prophecy of Isaiah. Sculpted in the spandrels of the loggia is the head of God the Father, so all three persons of the Trinity are present: God the Father in the sculpted relief, the dove of the Holy Spirit in the shaft of light, and Christ, by implication, in the womb of the Virgin.

The Nativity story is told in the Gospel of St. Luke (2:1-7). Joseph is called to Bethlehem to take part in a census. Mary accompanies him: ‘She was pregnant, and while they were in Bethlehem, the time came for her to have her baby. She gave birth to her first son, wrapped him in strips of cloth and laid him in a manger – there was no room for them to stay in the inn.’Luke then goes on to describe how angels announce the birth of Christ to nearby shepherds. We can see, however, that the actual account of the birth is very sketchy, and it was fleshed out by centuries of Christian tradition and by apocryphal gospels – i.e. those gospels which were not accepted as authentic by the Church. Much of the detail of the Christmas tradition comes in fact from the apocryphal gospel of the Pseudo-Matthew, a text which appeared in the west in the 8th and 9th centuries. Some versions were preceded by letters which purported to come from Saint Jerome, testifying to the truth of its contents and claiming responsibility for its tranlsation. Some copies of the text attributed it to James, son of Joseph. In this text, an angel tells Mary that parturition is near and orders her to enter into an underground cave. At the entrance of Mary the grotto begins to glow like the sun. The Pseudo-Matthew then tells of how the Virgin gives birth to a son in the grotto, and angels circle him as soon as he his born, singing ‘Gloria to God in the highest and peace on earth to men of goodwill.’ A while before, Joseph had departed in search of midwives, but when he returns Mary has already given birth. Preachers often stressed how the Virgin was exempt from the pains of childbirth suffered by other women as a consequence of the sin of Eve and did not need the attentions of midwives. The midwives he brings are named Zelomi and Salomè but they stand outside the grotto afraid to enter because of the light. Zelomi enters and touches the virgin and exclaims on her virginity: ‘A Virgin has conceived, a Virgin has given birth, a Virgin remains. Salomè, outside, disbelieves and the story of the withered hand is told [Editor’s note: Testing Mary’s virginity with her finger, Salomè’s hand withered]. The shepherds are told of the birth by an angel, and an enormous star appears over the grotto. The third day after the birth, Mary leaves the grotto and enters a stable, she puts the child in a manger and the ox and the ass adore him. The author clearly added these elements, not found in scripture, to show that the prophecy of Isaiah was fulfilled. These details became absorbed in popular medieval texts like the thirteenth-century Golden Legend, written by the Dominican friar James of Varazze (Jacobus de Voragine), often described as a ‘medieval bestseller’.

We can see most of these elements in a panel from the Maestà, a huge narrative altarpiece painted for the high altar of Siena Cathedral by Duccio, 1308-11.

As is often the case in medieval and Renaissance depictions of the Nativity, the artist has merged the accounts of the birth and given us a stable and a cave. The star hovers above the cave, and the ox and the ass are seen. The two midwives bathe the child in the foreground. A double scale is used, traditional in medieval art, where the important figures such as Mary, and to a lesser degree Joseph, are depicted as much larger than ordinary people such as the midwives or the shepherds.

Possibly one of the most important texts in the Middle Ages, apart from the Golden Legend, was the Meditations on the Life of Christ, written by a Franciscan friar. This image is taken from the illustrated text now in the Bibliothèque Nationale in Paris.

This too was diffused widely, and, while it relied on the same sources, it emphasised a direct emotional relationship between the reader/listener and the figures of the narrative. Written for a Clarissan nun, it advised the reader to imagine such scenes as her holding the Christ Child against her cheek. Perhaps the most important episode described in the Meditationes is the Nativity, as so much of the iconography of later medieval Nativity scenes, both north and south of the Alps, is taken from it: ‘when the hour of birth came, the Virgin rose and stood erect against a column that was there. But Joseph remained seated, downcast perhaps because he could not prepare what was necessary.’ The Virgin washes the child with her milk and then lays him in a manger, wrapped in the veil from her head. The ox and the ass breathe on the child to give him warmth. The Virgin then kneels to adore the child. Joseph pads the saddle with straw or hair so that the Virgin can rest on it.

Texts like the Meditations and sermons delivered by the Mendicant orders (notably the Dominicans and Franciscans) were aimed at making religious narrative accessible to ordinary, unlearned people. People were encouraged to imagine the Via Dolorosa as the main street in their town, and to empathise with the joys and sorrows of the the Holy Family. Saint Francis himself instituted the tradition of the Christmas crib, depicted here by Giotto or a follower in the Upper Church of San Francesco in Assisi, painted in the late thirteenth century. While Saint Francis was celebrating Mass, the Christ Child appeared in the crib.

The realism and sympathetic detail found in the art of Giotto and his school has been linked to this emphasis on empathy and emotional understanding of religious stories. Giotto’s depiction of the Nativity in the Arena Chapel shows the Virgin tenderly placing the swaddled child in his crib, while some angels gesticulate above the stable to the two shepherds standing at the right and others appear to look up towards heaven.

Another extremely important text for the Nativity narrative was the Revelations of Saint Bridget of Swede. Saint Bridget, or Birgitta, a Swedish noblewoman, died in 1373, and, due to the proliferation of accounts of her visions, her fame and iconography started shortly after her death. While on pilgrimage to the Holy Land, Birgitta experienced visions of the Virgin and Christ. Her vision of the Birth of Christ was, along with the account in the Meditationes Vitae Christi, of enormous influence in depictions of the Nativity. She described how the Virgin gave birth, and then, clad in a white dress, with her long hair flowing, knelt to adore him, as he lay naked on the ground before her, glowing with supernatural light. At the moment of his birth, a candle, lit by Saint Joseph, went out, such was the radiance of the child. The numerous adoration of the child scenes in fifteenth-century art owe a great deal to St. Birgitta’s visions. Some early late fourteenth and fifteenth-century depictions, such as this panel the Museo Nazionale of Pisa show Birgitta herself as a witness to the scene.

Birgitta herself is depicted kneeling at the left, veiled and wimpled as befitted her status as a widow and founder of a religious order. The Virgin, as described in the vision, is kneeling on the bare ground and wearing a white dress, the naked child lies, vulnerably, beside her.