Domestic occupation is a genre through which we get a view into the buildings and in cities of the Dutch Republic, and into the everyday lives of ordinary people. This is perhaps the genre in which the greatest innovation in the handling of light, perspective and the development of motifs and devices in art takes place.8 The Home was, in Dutch culture, set as an opposite realm from the World. The home was an idealised place where one could escape the immorality and harshness of nature and the world, particularly the urban world of the town street, which was never far away.9 In this genre, we get a sense of seventeenth century Dutch life and in particular, the role of the woman in society.

Pieter de Hooch's paintings depict domestic life in a way which both distinguishes from the outside world, and connects the interior to it. In his paintings, he used a device called doorkijkje, which opens the vista from one room to another through a series of open doors. This device introduces a broader view of the visual world and highlights the need for relief of the everyday struggle to maintain order within the household. 10 In The Mother’s Task, (1658-60), de Hooch presents a view of a mother checking her child's head for lice. Absorbed in her work, she faces away from the open door which leads into an adjoining room with an open half door. The trajectory of the light entering the room is in the opposite direction to where the mother is facing, concentrating on her task. The mother's exclusion from the open light illustrates the separation of the World and the Home. In Card Players in a Sunlit Room, (1658), the composition depends entirely on light. A group of wealthy card players sit around a table. Each individual is defined pictorially by the light, which passes through large glass windows and transparent curtains and into the room through the open door with a maid walking in from the alleyway outside. Light spills in from outside. The room seems almost transformed into a courtyard; the boundaries between the World and the Home bleed into one another. The card players seem free to pass between these boundaries, perhaps a criticism by the artist of this frivolous activity.

In Vermeer's A Lady Reading at the Window, we are at first drawn to the lady's image set in profile against a wall. She is reflected in the open window, its curtain draped over the top of the frame. The painting itself is covered by a curtain of its own, so now the reflection of her face in the widow pane seems a microcosm of the larger picture. Our line of view travels into the painting and out the window. It is a picture within a picture. The painted curtain was a familiar device in Dutch seventeenth century painting, a tool to draw attention to the act of looking, perhaps a conscious border set up to convey how painting was replicating the visual world. But in terms of the domestic setting, it could be a call to recognise the privacy of the home and to close off the world to it, using the same principle of de Hooch's doorkijkje device. While these paintings visually represent a way of life, they also comment on moral values within contemporary Dutch society – executed by means of technical virtuosity and pictorial device. 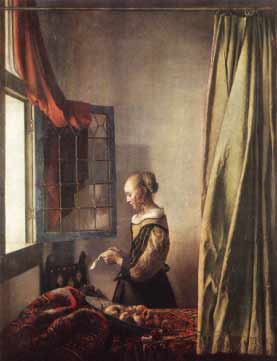 At this point is necessary to ask the question: did the artist record exactly what he saw? Vermeer has been praised with the ability to paint only what he observes. His view is impersonal, but it is this quality which makes him a legitimate recorder of the visual world. The space between the viewer and the Lady reading at a Window is occupied by the familiar bunched up carpet upsetting a wide bowl of fruit and is of course, painted with spectacular skill. This motif is a method of displaying virtuosity in relaying the seen image on to canvas. It is a tangible image because it is compositional and it is difficult to attach any more meaning to it than that. The reflected image of the lady in the window is more open to conceptual interpretation, but is it likely that the reflection is a device to create the illusion of glass? &ldquoHis description is always exact and in terms of light. To Vermeer, the conceptual world of names and knowledge is forgotten, nothing concerns him but what is visible.”11 Laurence Gowling's statement on Vermeer characterises his work precisely. The relationship between the visual world and the conceptual world is the key to understanding the message of the painting. Pieter de Hooch paints the visual world to illustrate an idea or distinguish between realms, while Vermeer records the visual world to demonstrate innovation in the art of painting.

The representation of only what is physically there in the instant accommodates no room for the conceptual world. This world is invisible to the human eye. However, if there was a desire to record the visual world, there was certainly meaning depicted within the purely physical. The art of Jan Steen is narrative and cluttered with objects loaded with meaning, personifications of virtues and vices and he even used his own children as models to put further emphasis on his moralistic account of Dutch life.

Steen's paintings, through their technical brilliance and moral outlook, convey an image of life, which, even before decoding, is striking in its realism. In The Village School, we can instantly recognise what is happening. A child holds out his hand to be struck in punishment for tearing his schoolwork. He is poised in fearful anticipation, while his classmates watch with a mixture of horror and delight at the boys' punishment.12 The walls of the classrooms are hung with the children's pencil cases and objects of everyday school use. Some of these objects are significant because they hold a moral message. The hour-glass on the shelf, for example, signifies the children's time must not be wasted. The candle boxes which the children used to transport material from home to school are symbolic of the students potential for learning. We know that teaching standards were low in the seventeenth century. Pay was low and hours were long.

Teaching was a form of social service as punishment for criminals, and they were often drunk, visiting brothels and neglectful of religious duties.13

Steen's paintings can be seen as illustrated social commentary, drawing our attention to facts of everyday life. The visual world is recorded in the action and expression of the human subjects, even though the parody of the situation makes it unlikely that Steen was painting a scene verbatim. The focus is primarily on individuals as they relate to each other and to their social environment. In Vermeer, the focus is on exact replication of what is seen in terms of light and composition.

Both artists record the real world, but at what point does allegory become visible and recognisable as real? Does it take an understanding of motifs and symbols to perceive the painted world as real? There is enough recognisable material in the paintings by both artists to convince us that what we are seeing is reality. An understanding of motifs and symbols does heighten the sense of sight in that it lends a view into factors relevant to the painter at the time of production. The idea of this kind of photographic painting can be difficult to grasp for the reason that we are conditioned to glean meaning from an art piece and this is done through a system of recognition of symbols and ideas.

Analysing the technique of the artists is useful too in examining this desire to record the visual world. The camera obscura proved to be an indispensable tool in the replication of an object or view onto canvas. Lifelikeness was the ultimate end a painter could hope to achieve. There are many sixteenth and seventeenth century treatises that discuss the artistic use of the camera obscura and recommend tracing the image cast from it. There is no evidence, however, to tell which artists actually did this.14 This tool was seen then to communicate a true visual order in which viewers would perceive the viewed in a universal way. But it cannot be seen to perform the same function as the painter because one is a machine and the other is human, subject to all sorts of subconscious influence through the transmission of the seen image to canvas.

Technical brilliance on the part of the artist can go a long way in convincing us that what we see in art is a mirror of the real world in seventeenth century Dutch art. Innovation in the use of light and the photographic replication of a subject can release the artist from the need to use imagery or symbolism to remind viewers of the world. These qualities were upheld during the seventeenth century; however, there was also a real need to record the visual world to remind the Dutch people of themselves and what they were collectively becoming. Duchness was everywhere and visible and characterised in a subtle pride mirrored in the architecture of cities, the panorama of landscape and within the rooms of the private world.