Saenredam's earlier Interior of the Church of St. Odulphus, (1649), shows a view of the focal point of the church, the pulpit, with mass in progress. The action takes place at the opposite end of the plain, the pulpit appearing in profile and the priest distinguished as a black, antlike figure against the vast bare walls. The congregation are also distant and this device coupled with the absence of any religious art lays the scene out in an architectural panorama.2 Both works succeed in giving exact pictorial descriptions of the interiors of churches. However, the starkness of the interior correlates with strict Protestant religious ideals. 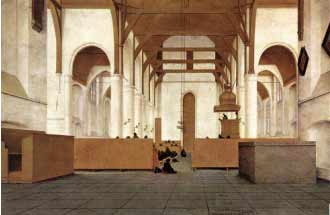 The figures in both paintings serve to show the Protestant belief that every one is equal in the eyes of God. The tiny figure of the priest in Interior of the Church of St. Odulphus is a further distillation of this doctrine, that the link between God and Man is direct. The role of the priest was to teach the word of God, whose presence is represented in the enormity of the church structure. The absence of distinguishable figures in the painting alludes to the belief that salvation is achieved by faith alone and that it is available to one and all.

Emanuel De Witt's Interior of a Church, 1660 gives greater emphasis on the detail of the church architecture and a close-up view of mass in progress. In the painting, the priest preaches from the pulpit high above the congregation, in an atmosphere of dark shadows and streams of light from the window. Although this painting zones in on one particular area of the church, its detail and composition draws the eye up to create a sense of enormity. While Saenredam's illustration of space inside the church is achieved by use of perspective and emphasis on scale, De Witt's representation has immediacy in its portrayal of the mass. Both artists focus on seventeenth century and Protestant ideas of reminding and recording what happens in church, and the Church as an everlasting institution as well as a stable literal space. 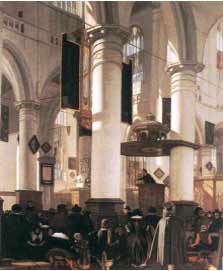 The Dutch in the seventeenth century had transformed their religious views and had subsequently defined themselves as a distinct group within Europe. They had also transformed the physical landscape; this was analogous to the emergence of the Dutch Republic. The recognition of this parallel acquainted the people with their collective triumph over adversity and was a formative element of national identity.3