Dutch art from the seventeenth century is an illustration of life and culture and, taken as a distinct period, it is characterised by acute attention to detail of the physical world. Pictures record the world but they are inexorably bound up with the perception of the world by the artist. The emergence of the Dutch Republic was the key national historical event of this century and the intense realism of painting from this time shows the desire to record not only the visual world, but also the collective mindset of the nation. In many ways, these two aspects are contained within each other in art from the period. While the art appears to be a mirror of reality, it is very often an affected reality, loaded with meaning.

The Dutch Republic, formed in 1648, comprises modern Holland. This was a volatile period, governed by its historical situation and religious beliefs. The southern Netherlands remained Catholic under Spanish rule, while the Northern provinces were mainly protestant. This was a period in which the production of art under the patronage of the Church ground to a halt. In the Protestant faith, the scriptures alone were the key to understanding the word of God. The idea of the priest as an intercessory figure between man and God was rejected by the faith. Lavish religious art depicting the suffering of Christ and martyrdom of saints had no place in the stripped down Protestant churches, showing that salvation was available to all, but through faith alone.

In the formative years of the Dutch Republic, religion was a significant factor in the shaping of social consciousness. The teachings from the pulpit situated the Scriptures in everyday life, as they were based on allusion and example. The type of scriptural idiom developed in the Netherlands had always been concerned with the regulation of social manners and seemed to be reflected in the collective perception of the world.1 It is therefore important to look at how these ideas were conveyed through Dutch culture and specifically, through visual art.

The interiors of churches were painted frequently during this period. Illustrations of their physical features were rendered on canvas with great skill and attention to detail. This action also served as a means of transmitting seventeenth century religious ideals. Pieter Saenredam and Emanuel De Witt are two painters who span the variety in this theme. Saenredam's The Buurkerk at Utrecht (1654) evokes the openness, enormity and emptiness of the church. 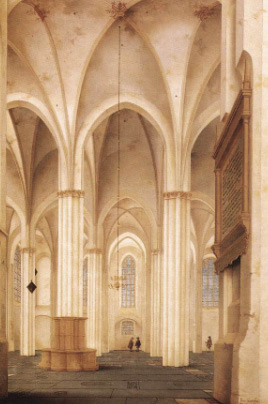 The view across the inscribed stone floor leads, in diminishing perspective, to the great clear glass windows, which let in the light and show the blue sky outside. Dwarf like figures in his painting offset the hugeness of the burrkerk. He presents a view of a monumental structure within the context of his time but also alludes to its permanence by leaving it almost completely devoid of people. The clear glass shows the extent to which Protestant theory on the decoration of church pervaded, its clarity intensified by the natural unadorned light passing through. The view is transcendent. The recording of the architectural detail alone would not strictly indicate that the work was illustrating seventeenth century Dutch life. What does indicate the period is the deliberate positioning of figures wearing clothing contemporary to the time of painting.