Trento’s Piazza Duomo is the buzzing heart of this city, the capital of the Trentino region. Duomo in Italian means Cathedral, and Trento’s Cathedral San Vigilio does indeed dominate the square, but there are lots of things that are equally important and interesting to see in this square.

The square from the middle-ages onwards became home to the civic and religious administration of the city, although before 1000 a.d it was an area beyond the city’s walls. The outward expansion of the city centred on this area, around a church dedicated to the city’s patron St. Vigilius, and with the construction of the Palazzo Pretorio and the Duomo it cemented its position as the main square of the city. 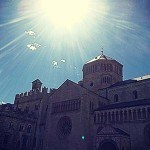 Trento’s Duomo, the Cathedral of St Vigilio is a beautiful Romanesque-Gothic building, with its famouse wheel of fortune window facing out onto the piazza. There have been a number of churches on this site, but the Duomo you see today was started in 1212 by the powerful Bishop Federico Vanga. The Duomo was the scene for one of the most important events in church history, when, between 1545 and 1563 the Council of Trent effectively launched the counter-reformation in Europe. 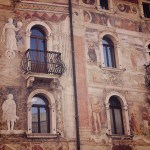 In the corner of the square are two magnificent 16th Century houses, with wonderful frescoes attributed to the Italian painter Marcello Fogolino, who arrived a fugitive in Trento in 1526, having been accused of murder in Friuli. While in Trento Fogolino worked on a number of important frescos, starting with a series on the Roman Emporors and scenes from the life of Julius Caesar in the magnificent Magno Palazzo (Castello del Buonconsiglio ) of Cardinal Bernardo Clesio. On the left hand side of the Cazuffi Rella houses there are scenes from Greek mythology, including the figure of Geryon, and scenes from the labours of Hercules.

The Palazzo Pretorio and Torre Civica

Today the Palazzo plays host to the impressive Diocesan Museum of Trento, which has a wide range of artworks as well as the remains from the 6th century church over which the city’s Duomo was built.

The Torre Civica, roughly 42m in height, and was once used as a prison, and a bell-tower which called the citizens to the Piazza Duomo for major events (including executions! For whom the bell tolls…). 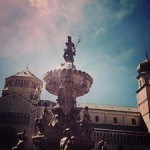 In the heart of the piazza is the famous Fontana del Nettuno, originally sculpted by the Northern Italian artist Stefano Salterio (whose works can be found in Brescia, Laglio and Domodossola) between 1767 and 1769. The fountain brought a continuous fresh water supply into the city – on its opening in 1769 the magistrate issued an ordinance forbidding citizens from polluting the fountain bywashing nappies, tripe, frogs and similar items!

The fountain you see today, though, is not the original. The Statue of Neptune, sculpted by Salterio, subject to damage over the centuries, was replaced in 1945 by a copy, sculpted by Davide Rigatti. Also, originally the fountain was surrounded by 16 small pillars linked by a chain. This was removed in the latter half of the 19th Century.

Interestingly, there is a copy of the fountain in the town of Elberfeld, Wupperthal in Germany.

Every thursday the piazza hosts the weekly market, where stall holders sell items ranging from local food and wines through to cheap socks and underwear! It’s a tradition in most Italian cities, and Trento is no exception – a great place to wander around for bargains.