Ten Things to do In Rimini

Rimini has such a large array of great things to do and see, that it’s hard to boil it down to a simple ‘best of’ list, but at the same time Rimini works brilliantly as a short-trip destination so we’ve put on our thinking hats, and narrowed down the choices to what we think are 10 essential things to do in Rimini. We’ve chosen things that you can do at any stage of the year, and doesn’t include things like annual events (for example, the Notte Rosa, or any of the many amusement parks that you can visit during the summer.

Check out the dawn on the beach 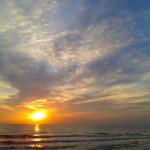 Rimini’s coastline faces eastward, and so, sitting at dawn on its stretch of sandy beaches, you can see the sun rise dramatically up out of the Adriatic sea. It’s a wonderful view, and well worth setting your alarm clocks for. During the summer months the dawn gives the chance to get a great glimpse behind the scenes, as you see the local workers going about the business of tidying up the beach, raking it, collecting rubbish, and setting it up so that it appears immaculate when the majority of tourists arrive for the day. 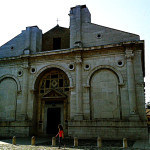 Rimini’s Tempio Malatestiano is one of the most important renaissance buildings in Italy. Built around 1450, over an existing church, by Leon Battista Alberti for the local lord Sigismondo Pandolfo Malatesta, the church incorporates various classical styles, and has the famous Chapel of the planets with its magnificent zodiac symbols. The church, it is said, was built by Malatesta to celebrate his love for his mistress Isotta – you’ll notice the letters S and I adorning the walls, standing for Sigismondo and Isotta, or alternatively, given Malatesta’s egomania, simply Sigismondo. All the pagan and classical influences of the Tempio proved too much for Pope Pius II who condemned it as “full of pagan gods and profane things”. The Tempio also houses an important crucifix by Giotto, and a famous fresco (of Malatesta) by Piero della Francesca. 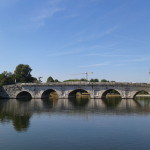 It’s not every day that you get to walk across a bridge that has spanned the centuries, but that’s exactly what you get as you walk out across Rimini’s impressive Tiberius Bridge. The solid marble bridge is one of the city’s most famous landmarks, and is still in everyday use. It’s also a nice way to reach the picturesque neighbourhood (Borgo) San Giuliano where there are various restaurants and bars, and some wonderful murals. No trip to Rimini is complete without a visit here. 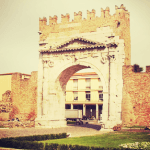 Rimini is blessed with more than just the Tiberius bridge, in terms of well preserved Roman sites. In a short distance you can visit the Augustus Arch, the Domus del Chirurgo (Surgeon’s House) and the ruins of the Roman amphitheatre. A walk around Roman Rimini should also include a stop in Piazza Tre Martiri – previously known as Piazza Giulio Cesare (Julius Caesar), the supposed site of the Roman General’s famous ‘alea iacta est‘ speech after crossing the Rubicon.

See Fellini’s Book of Dreams in the City Museum

Federico Fellini, the Oscar winning film director, is one of Rimini’s most famous sons. Much of his work refers to the city – in particular the stupendous Amarcord. From the 1960s onwards Fellini, under the influence of a Jungian analyst, kept a regular dream diary, sketching fragments from his imagination and dreams. These dream books contain lots of symbols and characters that would appear throughout his films and are a beautiful and vivid entrypoint into this genius’s art. On the occasion of the 19th anniversary of his death, the city opened a dedicated room to Fellini in the city museum, where you can view his dream books. There are many other Fellini landmarks around the city, and work is underway for a major museum/cinema with the redevelopment of his beloved Fulgor cinema in the Corso d’Agosto.

Rimini is a food lover’s paradise, where you’ll find some of the best cooking in Italy, but amidst the pasta, fish and meat dishes, there is one simple food that reigns supreme here, to the point of being a cultural symbol for the city and region (Rimini is the main town in the Romagna part of Emilia-Romagna): the Piadina. The Piada is a simple flat bread, made with flour, water, salt, and lard. What’s the fuss all about, you might ask – but once you’ve tried the piada you’ll understand; it’s the simplicity itself that makes it so good – poems have been written in its honour! You can find various take-away shops that sell piade and cassoni, known as Piadineria, and many restaurants will bring it to you in place of regular bread.

Most tourists visiting Rimini, at least during the summer months, base themselves at the beach – perhaps venturing once or twice into the old city centre. This is to miss some of the best that Rimini’s province has to offer. In the inland countryside there are loads of beautiful hill top towns, like Verucchio, Torriano and Santarcangelo di Romagna. The Conca and Marecchia river valleys offer two great routes to follow to discover the real Romagna. Another fun way to explore the hinterland is to follow the wine and food route of Romagna, which provides itineraries bringing you to local vineyards (wine production is one of the main industries of the Romagna region). Eat and drink like a king, with breathtaking views. 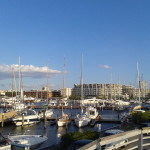 For many beachfront tourists Rimini starts at the port canal and continues, past the Grand Hotel, towards Riccione and Cattolica. They neglect the other side of the Port Canal, the neighbourhood of San Giuliano Mare, which is a shame as it’s a wonderful place to enjoy a meal, and soak up the atmosphere. Traditionally one of the poorest areas of the city, in recent years it has had a major re-development with some fantastic buildings, shops and restaurants springing up. Pride of place goes to the new pier or darsena which you can walk along and admire the luxury yachts moored in the harbour. At the same time, from the pier you can watch the small fishing boats heading out and returning – the fishing industry is veyr much alive and well in Rimini.

Have an aperitivo in Piazza Cavour

Piazza Cavour, the medieval heart of the city of Rimini, is a truly beautiful square, framed by the Palazzo del Podestá, the Teatro Amintore Galli, and the old Fishmarket (Vecchia Pescheria), this square is the place to head in the early evening for an aperitivo. Dominating the square are the statue of Paul V, and the Pigna fountain (which Leonardo Da Vinci praised for its unique harmony). Stroll into the Vecchia Pescheria to find more bars and restaurants.

If the symbols of Rimini’s city centre are the Augustus Arch and the Tiberius Bridge, there can be no doubt that the main symbol of Rimini’s beachfront is its impressive Grand Hotel – it’s no surprise that Fellini featured it prominently in his memoir film Amarcord (in one of life’s ironies, it was also here that Fellini, who rarely returned to Rimini from his adopted home of Rome, suffered the fatal stroke that ended his life). Opened in 1908, the Grand Hotel was declared a national monument in 1994, though it is still a functioning five-star hotel. The hotel is impressive to view from the beachfront, or from the surrounding park named in Fellini’s honour – better still, if your wallet can afford it, you can dine in one of the hotel’s restaurants admiring the landscaped gardens and air of exclusivity.