Ascoli Piceno – A jewel in the Marche

The city of Ascoli Piceno while easy to reach, is also far enough away from the main attractions of the Marche region to keep it off the general tourist track for many people, which is a shame because it’s a real jewel, with plenty to see and do, as TMO Travel found on a recent visit. 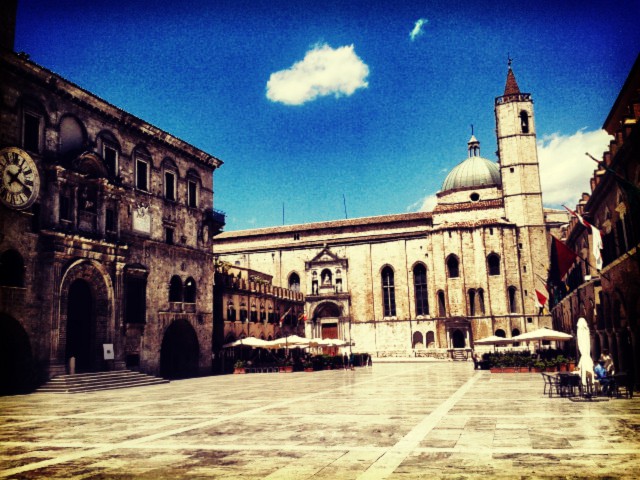 Piazza del Popolo – The most beautiful Piazza in Italy?

One of the main reasons to visit Ascoli-Piceno is to view its historic centre, with its beautiful Piazza del Popolo. This Piazza, developed in the 1500s, is regularly listed as one of the most beautiful in Italy – indeed, it was one of the four Piazze chosen in 1987 for a series of stamps, issued by  the Italian Republic, called Piazze d’Italia. Guido Piovene, a noted Italian journalist and writer, in his 1957 book on Italy wrote of Ascoli’s Piazza del Popolothat it was ‘the Italian piazza that, along with that of San Marco in Venice, most gives the impression of a living room, bound by Porticos and closed by the stupendous apse of the church of San Francesco. So one of the reasons that it’s exceptional is because of its proportions and context, but another is because of the Travertine marble. The paving stones of the square, in Travertine, give it a smooth shining appearance, and in the rain (which, thankfully we didn’t encounter) it’s said that the Piazza’s floor takes on the aspect of a mirror.

One of the things that Ascoli-Piceno is most famous for is the truly amazing Olive Ascolane. These are giant green olives, grown throughout the province of Ascoli Piceno, which – with their stones removed – are stuffed with a meat filling and then fried in a light breadcrumb coating. You can find these tasty snacks throughout the city, either at food stands or in restaurants and cafes. You’ll also find them outside Ascoli-Piceno as they have become famous up and down the length of Italy, being offered by bars nationwide as a tasty aperitivo – but obviously they’re generally a pale imitation of the real thing on offer in the city and surrounding towns.

In fact, the Olive Ascolane has received the D.O.P (Dinominazione Origine Protetta) – a recognition of its quality and origins. 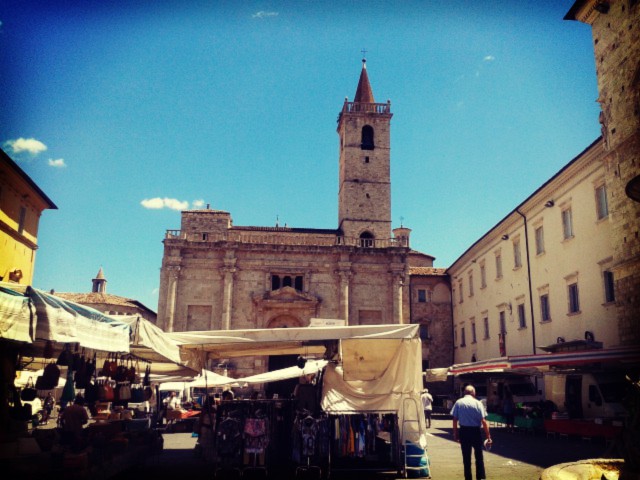 Not content with having Piazza del Popolo, the town also has the impressive Piazza Arringo, another beautiful square that most towns this size would kill for. It has the impressive Cathedral of Sant’Emidio, Ascoli’s Duomo which dates back to the 8th Century, and the Baptistry of San Giovanni – which was probably built on the remains of a pagan temple, perhaps dedicated to Hercules. The Piazza was the traditional forum of the city, and in the middle ages plaid host to the arringhi, arenghi o arringhe, citizen assemblies that deliberated on matters related to running the city. This square has played host to a number of notable historic scenes, including a visit from Saint Francis of Assisi, who addressed crowds here in 1215, or the Hollywood-like scene in 1462 when, during a jousting contest, the local lady Menichina Soderini knocked down Ludovico Malvezzi of Bologna>. Piazza Arringa still plays host, along with Piazza del Popolo to jousting and medieval displays during the annual Quintana festival, held on and around the first Sunday of August.

Where to Stay in Ascoli-Piceno

For a full list of places to stay, check here

For a four star hotel, in the city, try the Palazzo Guiderocchi, located near Piazza del Popolo.

Another good option in the Centro Storico is Palazzo Dei Mercanti, housed in a former medieval convent, with restaurant and wellness centre (and recently voted as one of the top 25 smaall hotels in Italy by Trip Advisor).

When to visit Ascoli Piceno

This is the sort of city which is good to see at any time of the year – For example, we visited in July, when the summer sun made the city’s marble look spectacular. We’ve also heard great reports about the city during the Christmas period, when the lights and christmas markets make the place look truly magical.

There are a number of annual events which might sway when you decide to go:
Ascoli has a renowned carnival festival every year (http://www.ilcarnevalediascoli.it/)
In August the Quintana Festival is a not-to-be-missed medieval festival
Also in August is the Ascoliva festival, celebrating the Olive Ascolane!