Action and Reaction with the Black Rebel Motorcycle Club

While an obvious departure from their previous records, Turner emphasises that it was not as the result of some epiphanous discovery of the blues, or somesuch. No, in reality Turner and his high school friend Peter Hayes have, minus Jago, always sounded different. “when the three of us get together and plug in our guitars and press go [laughs] it just gets louder and louder, and louder. That’s how we transform as a band. When it’s just me and Peter playing guitar together, it’s something completely different. We’ve always done it, since we were in High School, just playing on the back porch, songs that feel like they’re supposed to be played in that kind of place”. Looking back into the club, he continues, “When you get in a rock club, with a [pauses and laughs] very, very British drummer, you end up becoming a very different animal. I love it, it’s all different parts of us. Peter says were still just trying to introduce the band to people, it’s just taking longer than we thought”. 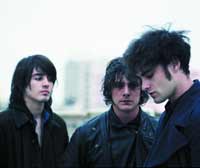 Turner doesn’t say it, but one suspects that this latest album means more to him than perhaps the previous two. Speaking during the tour for Take Them On Your Own, Turner spoke about the songs he hoped would make up the next album “They wouldn’t quite fit with what we’re doing now, but it’s way too tempting to make a whole album isolated with that kind of sound and see how far we can go with that…If we get it right, it will be the masterpiece”.

The clear vision that Turner had for the album occured before Jago’s mysterious departure from the band. His absence, paradoxically both helped to create the album, and at the same time almost prevented its creation. “The saddest moment was after we split up in Edinburgh,” Turner says, broaching an obviously tender topic. “Nick went his own way. We just lost our patience for all the bullshit, outside and inside the band, and somehow couldn’t see what we had enough anymore. We were there, we were playing, but we weren’t really. Our bodies were there, but our minds were elsewhere. We split, then Peter decided that he didn’t want to play music anymore if Nick wasn’t going to be a part of it. I couldn’t find the spirit of it. We stopped for awhile, – after we did the Philadelphia recordings, – and after a couple of months I just felt this really big responsibility to finish the songs, for some reason. I convinced Peter that there’s something bigger than us, that we weren’t supposed to just stop there. Let selfishness rule. For whoever is listening we decided to finish this record at least, and then after that to see what happens. We were perfectly ready to call it quits after that, after the record was finished. Put it out on the internet, or whatever it is you do [laughs]. But then Nick came back around, right when we were recording the last song, and decided to give it another go. We got signed again, so somehow we ressurected it”.

Ressurected. An appropriate word from a band whose latest album is particularly infused with religious imagery. In the best tradition of American blues it’s full of damnation, repentance, and fleeting glimpses of a possible salvation. Titles like Devil’s Waitin’, Restless Sinner, and Gospel Song sit easily on the country infused blues of Howl. What is it about American music that so readily conjures up heaven and hellfire? “Religion isn’t just for Americans,” he laughingly interjects as I utter the words Bible belt. “We couldn’t be farther from those people if we tried to be. The right wing evangelical, [pauses, trying to find the right words] sadistic fucked up people [laughs]. There’s a divide going on. I wish it was spoken about more. As soon as something like that rises up, there’s another side, a counter-culture that emerges to say ‘we’re not like that’. I hope we’re part of that counter-culture. Just to try and set something straight. I personally think that the only thing destroying the message of Jesus is Christianity. It’s a lot simpler. Religion twists and contorts to control, to make their own personal opinions, but I digress”, he smiles.”The record’s not really about that, to me. The band has always spoken about everything – love, death, war, religion. You talk about what you think and feel, and if you don’t, you’ve censored yourself uneccesarily. All the records have had mention of religion. We don’t talk about it, the three of us are just searching, with open minds”.

Leaving aside religion, the other title that provokes questions is that of the album itself, Howl. “There’s two different ways you can see howl. You can hear the word and think it’s something monstrous, a scream, but you can also think about a wolf’s howl as something eerie and soft almost, haunting and not really an attack (an attack is a growl, for the record -he laughs). I like to think of it that way. It was also, or originally, taken from the Allen Ginsberg poem. Trying to speak out for a generation, to find words for a new generation. Sometimes you’ve got to go back to go forwards. It doesn’t seem like people pay too much attention to the past anymore. They couldn’t give a shit about learning from it. So, we wanted to get that back in people’s heads, that words once carried a bit more weight”.

The beauty of Howl, to this writer’s ears, is that it avoids piggybacking on mere volume to get a point across. “The truth can be spoken in whispers and still be heard, as long as its spoken,” says Turner. Reactionary doesn’t always have to carry negative connotations, and this is a reactionary record. “The deepest part in our heart is for that, a retaliation, because it’s time. It feels like we’ve all been duped with commercialism, with the religious right controlling perception, with the government, the joining of church and state. There’s no separation. There are lots of things that need to be spoken about, to be said”, the bassist says.”I’m waiting for people to kind of tune into that. Sometimes you feel like you’re the only one thinking this, and it’s really hard. The only way to not feel like that is to make music, and to be part of the solution rather than the problem. A little bit at a time, it’s the only thing to keep the head up, to avoid slipping into a manic depressive state! That’s what we need. We really want to belive that this world is alright, that people are alright, that it’s a good place and worth fighting for. Sometimes it can be pretty disheartening”.

Contrary to what you might expect, Howl has blended in to their live set, shedding the stark contrast between it and the other records. “We’ve gone through a couple of different ways of doing it, and they all seem to work.- he comments, in light of the experience of their recent US. Tour – The more we play the songs, the more they glue themselves together, and it starts to make sense. If you see it live, I think it makes sense in the end. I was really nervous at the begining, because we recorded the record and yet could barely play a lick of it. We had a bunch of instruments that we didn’t really know how to play yet, and we faked it really good in the studio. When the tour came, we locked ourselves away for two months and killed ourselves trying to do it justice. I’m still trying to learn piano, to learn harmonica, so we can do it all live”.

And to the future? Perhaps the clue is in one of Howl‘s standout tracks, Promise. A piano led track that sounds simple and yet sophisticated. It is a far cry from the bands that critics like to suppose dominate Black Rebel Motorcycle Club’s record collection, such as The Jesus and Mary Chain. “I always loved Dylan and the Band, and things like that,” he says barely concealing his satisfaction that I’ve singled out this song in particular, “and I’ve always wanted to write a song like that, but was never really confident enough. They sound so simple, songs like that, but they’re really not. Finally I took the time, and wrote The Promise. I’m hoping to write more songs in that vein, but I doubt it’ll be for the next record. The next record I think we’re going to return to… I don’t want to give away any surprises. There’s going to be a time for it though. The thing that interests me the most is the nature of that song. It seems like the most accomplished song we’ve done. I don’t know, now I’ve got to set my sights a little higher”.

At this point the cold has begun to threaten my grip on reality, let alone on the tape recorder. We close the interview and I head indoors. Turner, with what must be anti-freeze running through his veins, seems surprised. He’s in this for the long run.