Action and Reaction with the Black Rebel Motorcycle Club 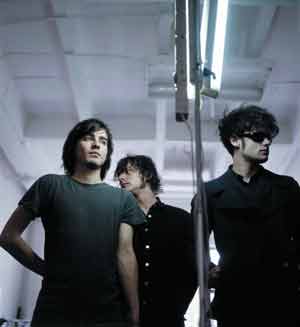 It’s the dead end of the year, the last days of October when the summer feels like a distant memory. It’s the sort of dull, neutral day that neither entices you outside, nor menaces you to stay inside. Black Rebel Motorcycle Club are inside a cold, damp, cavernous club booming through their soundcheck. Rifles, one of the songs that defined their sound back in 2001 on their debut album BRMC, echoes outside the club where already there’s a gaggle of enthusiastic fans assembled.

The song remains the same? Not really. Black Rebel Motorcycle club, the trio that Noel Gallagher described as his favourite band , have been through the mill since their last album, 2003’s Take Them On Your Own. An incident in Edinburgh, still shrouded in mystery, saw drummer Nick Jago leave/be ejected from the band. Shortly after, Record company re-structurings left the band without a recording contract. And yet, here we are, sitting patiently waiting for Robert Turner, the groups bassist and occasional vocalist.

Things seem less than promising for the interview. Turner, on-stage playing piano on one of the songs from the band’s new album, Howl, seems within spitting distance of the end of his tether, refusing the sound man’s requests to move monitors around on stage with a terse ‘please. I’m tired’. The band have something of a reputation, gained partly from tempestuous incidents like that in Edinburgh, alongside dark rumours of substance abuse, tight lipped interviews and a penchant for dressing exclusively in black denim or leather. The band’s moniker is taken from the motorcycle gang in Brando’s The Wild One (though in truth, like so many rock bands before them, only the road crew actually look like real bikers). Approachable isn’t the first word to spring to mind.

Backstage we’re introduced to Turner, who does indeed seem tired. He balks at the idea of doing the interview in the small box room we”ve been ushered into, and suggests a stroll outside instead. We walk out into the misty, bone-dampening early evening, to sit by a conveniently located, though less than picturesque, lake beside the venue. Jacketed I feel the sharp chill of the evening immediately, but Turner, angular, thin, and clad in a long sleeved shirt doesn’t seem to notice the temperature. Truth be told, with his eyes drooping he doesn’t seem to notice much about his surroundings. It’s apparent from the first question, though, that he’s not difficult to interview, just thoughtful. If you have the time and the interest, he’s a man with plenty to say.

“Britain just kind of feeds off of the new, the new anything,” he laughs when I ask him about the extreme love/loathing response that his band’s first two albums received from the British Press. BRMC was greeted with a frothy hysteria, while the second album Take Them On Your Own received a frosty cold shoulder. “It doesn’t matter how good it is, if it’s new it’s great! We didn’t really worry too much about it [support from critics] coming and going. It was like, ‘alright, it got us through that door’, and now we’re in a different place”.

That different place, one can’t help but feel, is a much more comfortable place for the band. Their latest album, Howl is a stripped back record, far removed from their previous two albums. Partly, perhaps, because Drummer Jago was absent for the majority of the recording, rejoining the group in the final stages. Partly because of the evolution of the record. “We started off doing some recordings with friends in Philadelphia, ’cause we didn’t really have any money when we left our label to make this record,” Turner explains. “We went to the basement of a friend’s house, his mom was cooking upstairs. It felt good, really chilled out. It felt better than a ‘proper studio’. We got some of the songs out of that. We didn’t quite find the sound, though, that was in our heads. So, we went back to L.A, where a friend of ours had a studio. He gave us a bunch of free time, reckoning if it [the record] gets picked up we’d pay him. That was great. We just locked ourselves away. It didn’t really take that long,” he says enthusiastically, then pauses, correcting himself, “or maybe it did. It didn’t feel that long . We were having fun, picking up all these crazy instruments that this guy had in his studio. We usually limited ourselves in that respect in the past, but this time it felt like we needed to do more, as musicians we needed to stretch ourselves. I don’t know why, but it just seemed instinctively time to stretch. Guitars, Bass and Drums, we knew we had more to offer. Then we got a bit paranoid that it would grow into a sort of orchestra style album, so we pared even those new instruments down, simplifying everything. The hope was that even with more it would sound less, and I think it does. That’s the trick. It’s our greatest illusion, as musicians or magicians”.