Two kilometres outside Vang Vieng we find ourselves, against our better judgement, arses wedged into floating truck tyres. A high concentration of backpackers poses a risk not only to the local population and customs, but also to the gormless traveller such as ourselves, precisely because of the recommendations that you receive, the multitudinous “have you done {insert activity that no local, or sane person at home would think of doing} ?… Oh, you have to!”. In theory it sounds like a nice idea, floating down the river watching life go by. The brutal reality though is that there isn’t enough current for us to drift back to Vang Vieng, and instead we have to wade back through icily still water, tugging our tyres behind us. Happily though we realise, passing some local kids fishing, that the Vang Vieng hustle doesn’t break the town limits. These kids are bemused at us, but the idea of taking advantage of our discomfort to earn a buck by offering us a lift back to town doesn’t even cross their minds. They’re too busy cracking up, justifiably, at the weird Falangs

Once more in the absence of anything resembling a bus, or a road for that matter, we clamber into the back of a pick up truck, and arrive six hours later, cramped and arthritic in Luang Prabang, the ancient capital of Laos, which in keeping with tradition is tiny. It’s also extremely charming, with lanes and wooden houses everywhere, bamboo fences partitioning tiny plots of land. There’s colonial French architecture as well, and the obligatory Wats. There’s even a five star hotel, which is beyond our means, and we imagine beyond the reach of most five star travellers unless they’re helicoptered in. 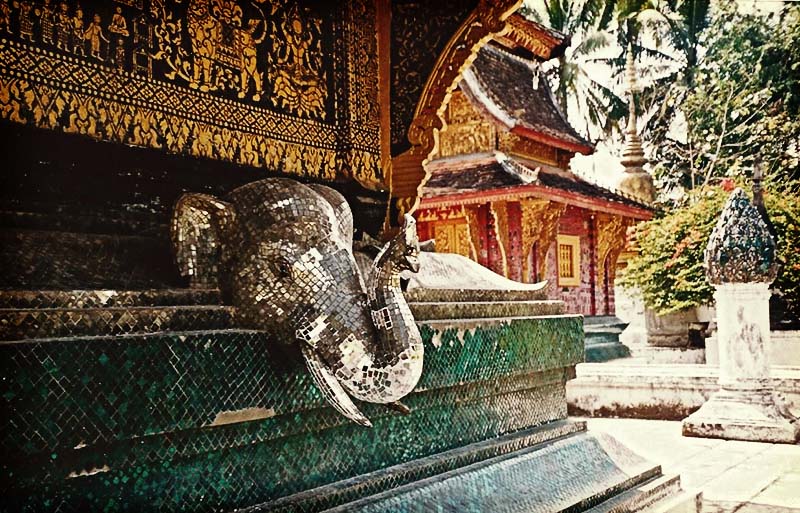 First thing to be done is to go for a Herbal Sauna – these are all over Laos (often in Buddhist temple compounds) and are fantastic for reviving the soul. The next day we head to a magnificent waterfall, and around the surrounding countryside, then back to town for one more sauna and massage, which even I enjoy despite a deep aversion to being poked and prodded – Even the dodgy steam room incident – an attempted “encounter” from a lone lonely Lao – doesn’t take away too much from the good vibes – Being at least twice the size of your average Lao I manage to decline the advance and still get some sociological info! Apparently it’s easy to be gay in Luang Prabang, the government are tolerant almost to the point of encouragement, it would seem.

The hotels in Luang Prabang range from the aforementioned five star hotel, through to some medium sized non-descript buildings. We chance upon a string of more traditional looking wooden hotels, that are oozing charm. Unfortunately, the gaps in the wood allow the water rats that are endemic free rein to scamper up and down, searching for ways into the kitchen below us. In the morning, noticing our hasty checkout, the owner of the hotel, an Irish man, mutters “Is there a problem? Did the rats freak you out a bit? I normally warn people in advance – then, smiling sadly – there’s nothing you can do about it, they’re all over the place. Harmless really”. With our excuses and apologies gamely accepted, we leg it.

Luang Prabang, a UNESCO world heritage site, was from the 1300s through to 1563 the Capital of the Kingdom of Lan Xang, from which the modern Laos is more or less descendant. A town with a population of roughly 16,000 (at least 500 of whom are monks), and a staggering 33 historic temples, it’s no wonder that Luang Prabang is busting at the seams with history and religion. The highlights include the magnificently pink bricked Wat Xieng Thong with its external walls covered with beautiful coloured glass mosaics, and the Royal Palace, where various souvenirs of Laos’s recent past are on display including a tackily crafted model of the moon landings, given by Richard Nixon to the royal family along with a cringe inducing letter talking about a ‘partnership for peace’ (while he was bombing the country back to the stone age, without the approval or knowledge of the American people). Our last stop is Wat Mai Sumannaphumaham with its gilded walls de
picting scenes from the life of the Buddha. Once every year, the Prabang (a golden statue of the Buddha) is brought from the Royal Palace to be housed in this temple for veneration. The Golden Buddha gives the town its name, and has been in Luang Prabang since 1545, apart from the period between 1779 to 1867 when it was stolen by the invading Siamese.

Laos has been invaded many, many times – by the Siamese, the Burmese, and the French. The invasions of the 21st century look set to be economic, with an influx of tourism and outside ‘investment’. Since Thailand placed restrictions on its own logging industry there has been a growing interest in Laotian timber from groups in Thailand (including, some suggest, the Thai Military). Robert D. Kaplan reported hearing the following from an unnamed UN official while he travelled in Laos in 1996:

The borders are breaking down: Thailand-Laos, Laos-China, Laos-Vietnam. You’re always seeing these trucks taking giant logs out of the forest toward Thailand or China. These are magnificent hardwoods. The logs go for as much as twenty-five thousand dollars apiece. [Pg 399, The Ends of the Earth, a journey to the frontiers of anarchy, Robert D. Kaplan].

Kapland concluded: “Laos is on the verge of becoming a true extension of Thailand, with its forests (boasting the highest percentage of woodland in Asia) prone to rape by Thai entrepreneurs”{pg400].

Time to leave for the north. Tired of being bounced around in pick up trucks, we opt for the ancient means of transport and take a boat up the Mekong to Nong Khiaw (nothing to report there, but the landscape on the way was only magnificent). From there on to Udomxai and then Luang Namtha, notable here mainly because the names are cool! Final destination was Muang Sing, a small village in the very North of Laos, in the heart of the Golden Triangle – the area between Burma, Laos and China – where most of the world’s opium is grown, and where governmental control is low in all countries.

Arriving in Muang Sing in a small minibus qualifies for one of the most surreal events to be encountered, anywhere. The bus is surrounded by elderly women from one of the local hill tribes, all dressed in traditional costumes, teeth blackened from chewing betel nuts, and shoving their hands in the windows trying to flog bracelets (or so it seemed), but they all smile and mouth the words “Ganja, Opeeeeeeum” and next thing you know under the bracelets are little cellophane wraps of a brown sticky substance which would have you locked away for a considerable amount of time if found in your possesion anywhere in Europe or America! We had thought the postcard sellers in Vietnam were persistent, but these class A pushing Grannies were incorrigible. Throughout the town, all the guesthouses had signs up requesting guests do not smoke opium or ganja in their rooms, as there was a nightly police inspection and fines for anyone caught of up to 500 dollars. Rumour had it that the grannies were in on the action and after selling would report the buyers to the police, and in return receive their goods back to re-sell. A dodgy scene to be sure, but not particularly threatening or unpleasant – the town was undoubtedly the centre of drug tourism for some, but had managed to escape being sleazy, no doubt partly due to its remoteness and was rather amusing in its own way. That’s not to suggest that opium addiction isn’t a serious matter. It’s a complex issue, with many guide books and experts warning that tourists purchasing opium in Laos are encouraging increased local addiction wih all the social and health implications that entails.

Cycling around on the potholed roads on the way to the Chinese border, a local pick up passes us. In the back is a guy wearing a combat jacket and jeans, looking for all the world like a western teenager, except he had a grenade launching rifle in his hands pointing out of the truck: not a good idea with the state of the roads, but that’s the atmosphere up here – out of bounds…

Our final trip in Laos had seemed on paper to be straightforward enough – travel from Muang Sing for two hours by pick up, to the Mekong river, and then sail down to the Thai border crossing. Easy on paper. When our pick up arrives at the river, all 18 of us dismount looking for boats – the locals have sussed that we’re stranded, and charge (uncharacteristically) a fortune for their speedboats, which are lethal rides in themselves as the Mekong is rocky in this stretch and crash helmets are still considered a girlie affectation by the locals. Mind you they’d probably only prolong your agony if the crash occurred!

It turns out on top of this that we’re all too heavy with our bags to use the boats anyhow. Problem. Problem solved when we see a large Chinese cargo boat down on the river unloading. Negotiations take place, mainly through a strange, middle aged but Action Man style American on his way to Burma (it seems to us no coincidence that three weeks later there is an attempted coup in Burma). We agree to go, and spend the evening watching Chinese videos subtitled into appaling English, with the captain and crew. These ‘Family’ videos are the most shocking movies we’ve had the misfortune to see. There’s one woman and a baby in the crew, and she doesn’t seem to mind even when the main characters (three teenage prostitutes) are kicked or punched every second scene… To our western eyes these are horrendous, cheap tacky movies, and also we are to spend the night on the boat with these smiling but freaky Chinese sailors, the paranoia grows … But everything works out for the best – and sleeping on styrofoam mattresses in the cargo hold with the rats certainly added a touch of exoticism to our final Lao journey.

In the morning it’s a hop, skip, and jump over to Thailand and a world of 7/11s, McDonalds, and creature comforts that, after three weeks in Laos, somehow don’t seem as appealing as one might have imagined.

Discovering Laos – an information guide from the Laos Embassy, Washington