« Tanti Auguri Silvio – It's nothing personal
The Days of Abandonment »

The cult continued in the fifteenth century. According to Vasari, Fra Angelico painted an image of Saint Peter Martyr in the tramezzo of Santa Maria Novella. Saint Peter Martyr was the titular of the church and convent of S. Pier Martire, founded for the Dominican second order in 1417. The altarpiece for S. Pier Martire was painted between 1428 and 1429 by Fra Angelico. The saint was also depicted in the altarpiece by the same artist for the Observant Dominican convent of San Domenico, Fiesole, painted around 1426. A document published by Gene Brucker shows that Saint Peter Martyr was well-known enough to be the somewhat ironic subject of a heretical sermon in 1419, by one Prete Antonio di Stefano, resident at that time in the abbey of Fiesole: ‘he had said that Saint Peter Martyr was damned and in hell, and that he had not died for the love of God but as the result of a vendetta’.

Saint Peter Martyr and the Medici

The earliest apparent association of Piero di Cosimo with Saint Peter Martyr appears in the so-called Annalena altarpiece, dated to around 1434. (fig.1) The dynastic implications of the iconography have been skilfully analysed by Francis Ames-Lewis, who has pointed out that Saint Cosmas gestures to Saint John the Evangelist, the name saint of Cosimo’s father, Giovanni, and gazes at Saint Peter Martyr, the name saint of his son. The saints are composed in groups of three on each side of the Virgin: on the left, saints Peter Martyr, Damian and Cosmas, on the right, Saints John the Evangelist, Laurence, and Francis. Saint Laurence was the name saint of Cosimo’s brother, Lorenzo, born 12th October, 1394. Francis was the name saint of Cosimo’s uncle, a significant individual who was the first member of the family to matriculate in the Cambio guild and the first to become prior for thirty years. It was also the name of his young cousin, Francesco di Giuliano, who, aged eighteen, shared Cosimo’s exile in Venice. The name was held too by Lorenzo’s son, Francesco, who died sometime before 1440 and was part of the name of Lorenzo’s other son, Pierfrancesco, born on the 15th May 1430. The placement of Saints Francis and Peter Martyr at the outskirts of the panel with both saints standing on the grass rather than on the stone step which accommodates the other saints, suggests an equivalence of status. Both saints were of course, representatives of their orders and can be seen as mendicant saints in a way that the others can not. Both are in profile, unlike the others, and gaze at each other across the Virgin and Child. Both could be seen, as suggested by Ames-Lewis, as representatives of two separate family lines.

The altarpiece was not originally painted for the Dominican church of Annalena, or S. Vincenzo Ferrer, which was only founded after 1450. Its founder, Annalena Malatesta, was the widow of the murdered mercenary, Baldaccio d’Anghiari. Her marriage to Anghiari was arranged by Cosimo de’ Medici, who also, after the loss of both her husband and son, aided her in founding the convent. It has been plausibly suggested that the altarpiece was originally painted for the chapel of SS. Cosmas and Damian in S. Lorenzo and was moved to Annalena only when that chapel became a burial one in 1452. 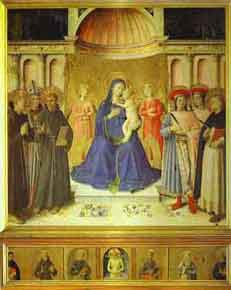 The altarpiece for the Observant Franciscan house of Bosco ai Frati has been dated to sometime in the 1430s by some and to 1449 by others. (fig.2) Although the Medici formally took over patronage rights of the convent in 1420, their involvement predates that by about nine years. The Virgin and standing Christ Child are placed within an elaborate Renaissance apsidal niche, and flanked by two groups of three saints each. On the left are Saints Anthony of Padua, Louis of Toulouse and Francis of Assisi. On the right, Saints Cosmas, Damian and Peter Martyr. The saints appropriate to the Franciscan order are thus neatly divided from the onomastic saints of Piero and Cosimo de’ Medici. Orange trees are seen in the background, a reference, as Ames-Lewis has pointed out, to the ‘mala medica’ believed to cure illness.

The high altarpiece of the Observant Dominican church of San Marco, painted by Fra Angelico, was probably completed by 1440 to 1441.

(fig.3) Although three of the saints found in this altarpiece are found in its predecessor on the high altar, saints Mark, Dominic, and John the Evangelist, it is in many senses the most eloquent figuration of Medicean onomastic saints and complete expression of devotional and familial needs. On the left the artist placed saints Cosmas, Laurence, Mark, and John the Evangelist, and on the right, saints Francis, Dominic, Peter Martyr and Damian. The figuration is thus similar to the Bosco ai Frati and Annalena altarpieces, while Saint Mark is titular of the church and Saint Dominic is the name saint of the Dominican order. The saints, however, could remind the viewer of more than just members of the Medici family. The presence of Saint Laurence, the name saint of Cosimo’s brother, can be seen as having Eucharistic significance. Laurence was associated with grain and was the patron saint of the Florentine bakers. In the sermon for his feast day, Albert the Great related the Gospel verses to Christ as well as to Saint Laurence: ‘Christ is called the grain of wheat who died in the Passion, and whose many fruits God the Father gathered in his Ascension.’ The script on the Virgin’s robe is taken from the Little Office of the Virgin and is also Eucharistic, it reads: ‘As the vine I brought forth pleasant savor,/and my flowers are the fruit of honor and riches;/ I am the mother of fair love, and fear, and knowledge and holy hope.’ The eucharistic significance of the altarpiece is clear in terms of composition. The Albertian ‘window into reality’ created by mathematical perspective is subverted by the deliberate placement of the small Crucifixion in the foreground, just under the naked body of the Christ Child, the same body that would be consmed in the host after transubstantiation. Saint John the Evangelist himself wrote of how the word was made flesh, a statement that has both eucharistic significance, and also a more literal resonance for those who desired to read the word, not only Cosimo himself but the friars of the Observant Dominican order. The symbolism of Saint Mark to the commune must also be remembered. In 1427, the feast of Saint Mark was celebrated by the commune in memory of its alliance with Venice, signed in 1425. The Silk Guild was ordered by the Commune to ensure that the Silvestrines refurbished the church of San Marco. Pope Eugenius himself was Venetian, and the founder of the Observant Dominicans, Fra Giovanni Dominici, was half-Venetian and half-Florentine. Dominici was born in Florence in 1355 and entered the Dominican order at Santa Maria Novella in 1380. He was transferred to Santissimi Giovanni e Paolo in Venice in 1399. Further, although the Florentine-Venetian relationship from 1438 to 1440 was weakening, Cosimo had good reason to remember Venice with some affection. He had spent his exile there and had been greatly honoured by that city.

The double cell of Cosimo de’ Medici, reserved for his use, was frescoed by Fra Angelico and Benozzo Gozzoli. The scene depicts Christ on the cross with the script ‘Mulier ecce filius tuus’ issuing from his mouth: the consignment of the Virgin to Saint John the Evangelist as her son. However, here it is Saint Cosmas that kneels beside the Virgin Mary and engages the gaze of Christ, while Saint John the Evangelist kneels is on the other side of the cross with Saint Peter Martyr. Three filial generations are figured by their saints here: Giovanni di Bicci, Cosimo’s father, by Saint John the Evangelist, Cosimo himself by Saint Cosmas, and Piero, his son, by Saint Peter Martyr. 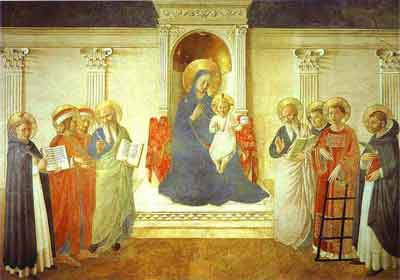 Saint Peter Martyr appears again in Angelico’s fresco of the Madonna and Saints in the east dormitory. (fig.5) This was in the clausura part of the convent, and was thus strictly off limits to the laity. Thus, the saints here can remind the friars of the convent’s patrons and invite them to pray for their benefactors, but do not have any purpose within the paradigm of civic display. The other saints are Dominic, Cosmas, Mark, John the Evangelist, and Laurence. All are explicable by their location within the Dominican house of San Marco and Medicean names.

Peter Martyr is found again in the Coronation of the Virgin in cell nine, along with Saints Dominic, Benedict, Thomas Aquinas and Anthony Abbot. Three of the saints, Dominic, Peter Martyr and Thomas Aquinas are Dominicans and intimately connected with the growth of the Dominican order. (fig.6) The other two were important founders of early monasticism. Saint Anthony Abbot also represents a monastic ideal, treasured by Cosimo; he had marked a passage in his own copy of Cassian’s Monastic Institutes on Saint Anthony’s triumphs over the flesh, and had aided the acquisition of some of his relics by San Lorenzo in 1444. The importance of monastic saints is demonstrated again with Fra Angelico’s Crucifixion with saints in the chapter house. (fig.7) Again, Saint Peter Martyr appears, in a host of saints known for their monastic institutions or reforms. The Medici are shown as connected with this reform process by the presence of ‘their saints’ yet again: John the Evangelist, Cosmas, Damian, Laurence, and Saint Peter Martyr.