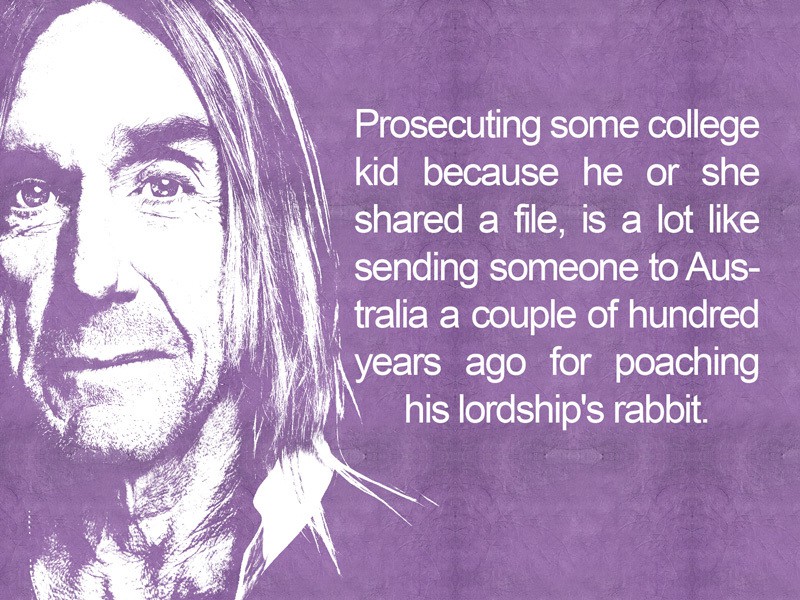 Using his lifetime’s experience in the music ‘industry’, Pop (a.k.a James Newell Osterberg, Jr.) talks about artistic ambitions, binary-code, and the relationship between money and art. At times rambling, at times hilarious, his talk is addressed largely to young musicians.

Obviously one of the main issues dealt with is filesharing, and while Pop reserves the right to call out people like Kim Dotcom for making money out of filesharing, his main message remains

“Personally I don’t worry too much about how much I get paid for any given thing, because I never expected much in the first place, and the whole industry has become bloated in its expectations. Look – Howlin Woolf would work for a sandwich.”

There are plenty of tangents in the hour long lecture, including this fascinating snippte:

“It’s my own personal view, having lived through it, that in America the Beatles replaced our own assasinated President John F. Kennedy, who represented our hopes for a certain kind of society. The stones represented our own assasinated folk music, which our own leaders surpressed for cultural, racial and financial reasons. It wasn’t o.k for everyone, to be Kennedy or Muddy Waters, but those messages could be accepted if they came through white entertainers from the ‘parent’ culture. That’s why they’re still around.”