There are few transgressions less forgivable than that of supporting a second football team. If football is a ritual replication of warfare, then adopting a second squad is rightly seen as nothing short of mercenary. Peruse the fan forums on the sites of any of the Irish Eircom league teams’ websites and you’ll see a unifying theme attacking those fans who support the Manchester Uniteds, Arsenals, and Liverpools (or indeed Juventus, Real Madrid or, in extreme cases, Sparta Prague – such are the perils of globalisation) of this world whilst neglecting their own local team. But the bright lights of football glory are not always the motivation for infidelity. “It’s like having a mistress,” laughs Lele, a lifelong Bologna FC supporter who, along with his mate Cecca, decided to search for a European team to ‘adopt’ last year. “Bologna is like a faith – a life-long committment, but there are some times when you need to look elsewhere, when something’s missing,” he says, while supping on a pint of stout in an Italian Irish bar. And so, the intrepid duo found Cork City – and it’s developed into a love affair!

It’s one thing to choose a foreign, corporate behemoth as your team, quite another to adopt a side that has amongst its first squad players semi-pros who work as car salesmen or firemen as their ‘day-jobs’. “We were looking for a purer football,” explains Cecca, the second half of Cork City’s Bologna fan club. The decision to look further afield, away from Serie A, came at the end of the 2004-05 season when Bologna were controversially relegated to Serie B (despite the fact that at least two clubs in Serie A technically should have been relegated first, for accounting irregularities). Fed up with the politics and polemics that surround winning and losing in Serie A, Lele and Cecca decided to choose a European side to support for the next season. It wasn’t, though, necessarily love at first sight with Cork City – practicalities came first, with the pair considering sides in both Spain and Portugal as well, based on transport. The age of the low-cost flights, combined with an already firm obsession with Ireland on Lele’s part, saw the pair agree on choosing an Irish team. From there Cork City managed to woo the two, as it was the only Irish team in the UEFA cup (however briefly). 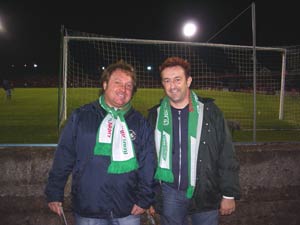 Lele’s obsession with Ireland is worth explaining. By profession he is a music promoter, running Bologna’s largest rock club Estragon, with a close association with Italian band The Modena City Ramblers. The Ramblers, as the name suggests, play a crazy hybrid of Irish folk-music with an Italian twist. The band plays to huge crowds throughout Europe, and they have been regular visitors to Ireland. Lele started out as tour manager with the band, and has been visiting Ireland on and off for the best part of ten years – always returning to the same Dublin B&B where, one suspects, he’s treated more like a returning (paying) relative rather than simple tourist.

Supporting a team on the edge of the known world (by European footballing standards) is far from easy though. Preparing for their first trip, they searched fruitlessly online to arrange tickets before journeying to Turner’s Cross, City’s homeground. Undaunted Lele contacted the club by email, explaining their resolve to come and see the team play. “I got an email back from the Club manager, asking me if I was pulling his leg,” laughs Lele. Having convinced the club that they were Kosher City fans, a pair of free tickets was duly set aside for them for their arrival. The day of the match, armed with maps and fortified by a hearty Irish breakfast, the two set out for the stadium.

Cecca, eyes wide describes the scene: “It was a different world – compared to matches here in Italy. I remember going to see Cesena [a Serie B team] with my young nephew years ago, and being almost scared for our safety in the stadium. In Turner’s Cross there were families enjoying the match without being aggressive or threatening”. The two chat about the differences between stadiums: in Bologna the stadium is an imposing piece of Fascist Architecture, with signposts directing traffic towards it from every angle of the city. In Cork the two Italians almost wound up watching a rugby match, having presumed that the floodlights they spotted denoted Cork City’s grounds. The idea that the football stadium might not be the biggest sporting structure in the city is quite simply foreign to them. “And another thing,” says Cecca, “you can’t smoke in the stadium!!”. His shock is twofold, first that smoking is banned, and secondly that people obey the ban. Anyone who’s ever frequented the Curva at any Serie A game will testify to the clouds of marijuana smoke enveloping fans.

The fans, rather than the actual football, though remain the main difference. Or rather the way the fans react. There’s no less passion, but perhaps more fair play on display at Turner’s Cross. For example, when the referee makes a poor or debatable decision, the Irish fans don’t loudly call into question the man’s wife’s virtue, or scream for blood. Instead they boo. “It’s amazing,” says Cecca enthusiastically. “I’d love to get them to do this in Bologna. Could you imagine!? When the referee makes a bad decision, if everyone in unison went ‘Boo! Boo!’ – I think it would terrify him.” Both mimic the booing crowd, which is enough to draw worried glances from the rest of the clientele in the bar, so no doubt it would work wonders on the sidelines.

They share another curious incident with us. Before one of the matches they stopped for a pint, with other Cork City fans in a pre-arranged pub (both have been adopted by the local fans – being regular visitors to the Fans Forum online). Supping their pints outside, they noticed the pub across the road was packed with rival fans. That the two crowds could drink so close together, and even sing and slag each other, without provoking a riot was an eye opener.

Of course, this is a rosy picture and not necessarily comparing like with like. Italy’s richest man, Silvio Berlusconi, was until recently President of A.C Milan. The President of Bologna FC, Alfredo Cazzola, was the founder of Italy’s largest trade fair organisation SMAU. The Chairman of Cork City, Brian Lennox runs a chain of fast food shops, reputedly serving the best fish and chips in town! Perhaps it’s easier to be light-hearted when there’s less big business involved.

Surreal is not the word, when the two chat bitterly about Liam Kearney’s controversial move from Cork City, shaking their heads at this betrayal. Talk moves on to the qualifying groups for the 2008 European Championships. Ireland are in the same group as San Marino, the small mountain Republic which is less than two hours from Bologna. “We’ll have to go!” says Lele, when he hears of the draw. “Some of our lads are on the Under21s, so we’ll have to go and cheer them on”.

The Bologna Cork City fan club is growing, the pair’s enthusiasm is contagious and already a number of friends and fellow Bologna fans have signed up to travel with the duo. Ambitious plans are afoot to persuade Lele and Cecca’s two clubs, Bologna and Cork City, to organise a friendly, where this cross-cultural football exchange can continue.

Both Lele and Cecca earn their living through the music business. Cecca works for Mescal, one of Italy’s most successful independent record labels, home to bands like Afterhours and Yo-Yo-Mundi (who recently played in Dublin as part of a European tour). The cross-cultural exchange is thus not limited to football, with both taking a keen interest in how the Irish music scene works. For example Lele’s club has played host to Damien Rice, Therapy?, and Josh Ritter (another honorary Irish man, though probably not a Cork City fan) in the very recent past.

We finish our drinks with one final question. What if Bologna manage to claw their way back into Serie A? “With Cork City it’s more than a fling now,” says Le
le determinedly. “The Wife will just have to get used to it,” he chuckles, as they walk away, discussing amongst themselves the likelihood of Cork winning this year’s Setanta Cup…