The sensuousness, romance and decadence of Art Nouveau were undoubtedly influenced by the idealised paintings of the Pre-Raphaelite women11. While the beauty and delicacy of line combined with the clarity of recurring patterns and motifs were adopted from Japanese art12. The linear possibilities of hair made it an ideal choice as a design element for artists wishing to introduce an exotic taste of orientalism to their work. In the mid nineteenth century, artists such as Rossetti helped to secure the association of femininity with masses of thick, flowing hair as seen in his countless paintings of women. The symbolic meaning of hair changed dramatically in harmony with the changing representation of woman in the beginning of the twentieth century, and adopted more sinister associations.

During the Victorian era, hair symbolised the sexual morality of women. Pollock suggests that a

woman’s loose hair was “a decent and suggestive sign of allowed disorder, conventionally a sign of woman’s sexuality”13. Furthermore, the colour of the hair is significant as traditionally Judas and Jews were reputed to have had red hair; thus red hair specifically had associations with betrayal and sin14. However, the use of red hair in the Apparition of Jesus to Mary Magdalene (right) further highlights Clarke’s awareness and understanding of the contemporary iconography of the femininity, morality and sexuality of women.

For artists who wished to encourage moral codes of behaviour, hair was a perfect symbol for woman without having to resort to the obscene iconography used by Hieronymus Bosch in medieval times. Thus, hair became the symbol of femininity. However, during the late nineteenth century hair became symbolic of the wiles of the feminine creature, woman. Poets such Swinburne helped create imagery of dangerous femininity in lines such as:

Not fire nor iron and the wide-mouthed wars

Are deadlier than her lips or braided hair

For of the one comes poison, and a curse

Falls from the other and burns the lives of men 15

In Idols of Perversity, Bram Dijkstra observes that the “mid-century cult of the superfeminine female had led to an even greater emphasis on golden tresses”, which resulted in the fetishization of hair16. The braided hair imagery attached itself to mythologies of the Medusa to produce representations of threatening femme fatales with snake-like tendrils of hair. For artists concerned with popular themes, the obvious phallic association of Medusa – a monstrous woman with lethal snakes for hair – must have greatly appealed to their imaginations

Clarke uses the motif of hair itself to symbolise the suffocating snares of a depraved femininity and dispenses with the need for incorporating snake-like imagery. Clarke used the motif of hair as early in his career as 1913, when he illustrated Samuel Taylor Coleridge’s The Rime of the Ancient Mariner17. In illustration 3.21, Clarke portrays a siren of the sea who was, as Coleridge described her, “the Night-Mare Life-in-Death…Who thicks man’s blood with cold”18. Coleridge’s wordplay on nightmare into ‘Night-Mare’ perhaps inspired Clarke’s dark portrayal of Life-in-Death with a profusion of mane-like hair. The intertwining mass of hair is seen engulfing Death. The exaggerated swell of hair caresses its owner’s body like waves of an ominous sea.

Clarke used hair as a strong design feature for Ligeia, in Poe’s Tales of Mystery and Imagination, 1919. Clarke perfectly captures the sinister essence of Poe’s lines, “there streamed forth, into the rushing atmosphere of the chamber, huge masses of long and dishevelled hair; it was blacker than the raven wings of midnight!”19. Clarke uses the motif of hair to encapsulate the story of Ligeia. Ligeia is an idolised dead wife who, through sheer strength of will, comes back to life in the dead body of the narrator’s second wife. The deathly black hair of the awesome figure of Ligeia acts as a shadow smothering the diminutive male victim, her husband. Indeed, there seems to be a mountain of hair forming ominously behind the male figure.

In 1922 Clarke used the absence of hair to symbolise depraved femininity. 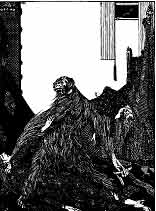 The Last Hour of the Night featured as frontispiece illustration to ‘Dublin of the Future’, a new town plan scheme for the war torn city of Dublin20. Gordon Bowe claimed it as “one of the stranger expressions of his imagination”21. Clarke depicts a cadaverous figure that wreaks destruction on the city of Dublin. The creature’s bald head lends it a curious sense of depravity. However, the figure is shrouded in her own hair, which droops from her wretched body swamping the streets of the wasted city. It bears a close resemblance to the ape in the artist’s illustration to Poe’s The Murders in the Rue Morgue. The severely hooded eyes, bald head and masses of long undulating hair covering the ape’s body signify a primordial bestiality and malignancy. In The Last Hour of the Night, Clarke relates hair to depravity, destruction and death, and it seems to take on a life of its own, independent of the female creature to which it was once attached. The independent character Clarke bestows on his hair motif displays the pivotal difference between Clarke and his contemporaries. The motif of hair not only provided sumptuous linear pattern, it also provided a sinister symbolism of its own.

Nature similarly provided endless creative possibilities in pattern and design for imaginative artists, not to mention those of symbolist tendencies, in particular Clarke. The increasing scientific and technological advances at the end of the nineteenth century meant that the microscopic study of plant and animal forms were now readily accessible to all eyes22. During the mid-nineteenth century the simplicity, beauty and purity of flowers became the perfect personification for the desired qualities of woman, “they smile, but they are silent”23.

A dramatic change in the symbolism of flowers corresponded to a shift in attitudes towards women at the turn of the century, and was reflected in the contemporary literature. Charles Baudelaire’s Les Fleur du Mal from 1855 is a prime example of literature that subverted floral symbolism, and a text that Clarke displayed an interest in illustrating. Baudelaire saw floral mysticism as displaying, in his own words, the “stupidity, error, sin, and filthy minds” of society24. Women were now seen, not as pure virginal bouquets, but rather as flowers of evil, corrupting and enticing men into sin by the wiles of their sweet perfume and charming beauty. The overt sensuality is evident in Baudelaire’s words:

I shall drink to drown my rancour for a start

Nectar, sweet hemlock and the rest

From the ravishing tips of your erect breast25.

Flowers were incorporated into a plethora of themes mainly associated with woman.

Clarke uses the motif of flowers not merely as an ornamental device, he also embraces floral symbolism in true Rossettian style. Clarke’s wonderful illustration to Poe’s Story of Morella in Tales of Mystery and Imagination depicts a man leaning over the body of his dead wife or perhaps daughter, both named Morella. Both figures are shrouded in a vast world of fantastical flowers. Clarke takes inspiration from the only mention of flowers in Poe’s dark tale in the line, “Nor was I indeed ignorant of the flowers and the vine – but the hemlock and cypress overshadowed me night and day”26. The simple daisies and more exotic sea urchins transform into female faces, their swirling hair forming plant–like tendrils. Bodkin tenderly describes Clarke’s Morella: “where the dead wife’s face shines, in every flower and star, conveys a melancholy, desperate and yet majestic”27. The sea of flowers and grieved female faces serve to emphasise a sense of the delicate beauty and poignant loss of Morella.

Floral symbolism not only indicates femininity; it can be explored further to reveal sexual associations, particularly in the work of Clarke. Pollock, in her examination of Rossetti’s work, regards flowers as symbolising women’s sexuality, or more specifically their genitals28. 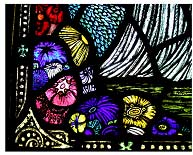 Dijkstra similarly notes that at the turn of the twentieth century artists explored a fear of “the horrendous vulval ‘flower’ of nature”29. Clarke can also be seen to consume the sexual association of flowers. The windows in the Presentation Chapel are again a superb example as they are flooded with waves of bright, stylised flowers. The myriad of flowers and sea urchins in the background of the Garden of Gethsemane windows, flourish an animated and cheerful sentiment. The only indication of the ‘terror and anguish’ in the Garden at Gethsemane as the Bible proclaims, is perceived in the expression on the face of Jesus30. Otherwise there is nothing in these two windows to portray the sorrowful event in the life of Christ.

However, there is more to Clarke’s floral symbolism than merely displaying a uniform jovial quality in the Chapel windows. A detail from the window shows that the flower and sea urchin forms can be seen to resemble breasts and nipples (right)

. The sexual connotations of these floral motifs can be established by an examination of Clarke’s illustrations, where the artist uses floral decorative forms on breasts and nipples. This decoration places emphasis on the breasts and thus on the sexuality of the female figure. Clarke admitted that his illustrations provided an escape from the confines of his religious commissions31. Thus it is probable that the use of floral motifs allowed Clarke to express a European sense of decadence within the restraints of religious institutions.

The iconography in Clarke’s work can be seen as a poetic symbolism of femininity. The trappings of femininity, in terms of styles of dress and costume, attest to the changes in the role of women in society as represented by Clarke. Furthermore, an exploration into the iconography of femininity exposes the patriarchal fears underlying perceptions of woman at the close of the nineteenth century. As a consequence of these fears, the motifs of hair and flowers underwent dramatic transformations in symbolism. Floral symbolism went from a benign indicator of femininity to the malignancy of Baudelaire’s carnal flowers, as portrayed by Clarke. While Clarke utilised the visual impact of the motifs of hair and flowers to great effect, he also recognised their sinister associations in the turn of the century mindset. Clarke’s works saw hair becoming threatening living organisms and flowers transforming into parts of the female body, from faces to nipples.

A closer look at the subject matter, in particular as to how woman was portrayed, reveals that symbolism and motifs were transferred between religious commissions and profane illustrations alike. Clarke’s use of contemporary fashions and dramatic costume expresses a fascination with displaying exotic femininity, woman as other. Motifs such as hair and flowers are potent signifiers of femininity in nineteenth century symbolism; subsequently in Clarke’s work these motifs reveal the embodiment of woman as passive objects. Clarke used this particular iconography not only to secure his oeuvre firmly within the fields of European culture, literature and art, but also to express avant-garde liberal sentiments in true symbolist fashion.

5 The kokoshnik were the most precious part of Russian women’s clothing and pearl-embroidered ones were mainly only worn by wealthy middle class women. Ibid., p. 16.

17 However, Clarke’s series of illustrations were never published as the publishing house along with all of the intended designs for the book, were burnt during the 1916 Rising. Gordon Bowe, Clarke: His Graphic Art, p. 112.