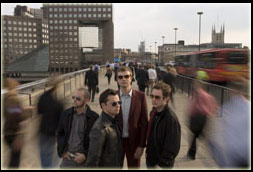 There's a knock at the door. A young girl enters, weighed down with plastic forks, Styrofoam boxes of food and a plastic bag full of soft drinks. Paul Noonan coolly surveys the new guest.“I don't think we're eating in this room”, he says. “I think there's a bigger room which we're going to use”.“Oh I'm only here on work experience”, the girl shrieks back. The striking blondness of her hair superseded only by the scarlet glow of her cheeks. “Do you need a hand?”“No it's okay”, she says while struggling to gather up all the plastic forks among the assortment of fast food. Paul calmly opens the door and she scurries out. You sense the words “Oh my God” bursting to escape her pursed lips.

There is no other word for it. Paul Noonan is cool and while it may seem an irrelevance, a meaningless outdated tag, it is still somewhat revealing. Even in a banal scene the sense of cool pervades the place as much as the girl's nervous horror crowds the atmosphere.What makes cool? The self-confidence and sureness about what you do because what you do isn't an occupation; it's the embodiment of a long desired dream. “We've never seriously considered not doing this”, he says. “I don't remember ever having any doubts about it. I don't remember it being a decision between that and engineering.”

Paul is back in a house in Ardclough, a rural village just outside Celbridge in Co. Kildare. The GAA club, the church and the shop occupy a small triangle of space that gives Ardclough its physical presence. Houses are dotted about in the distance, down roads that conceal the close proximity of Dublin.

Paul has just finished a Computer Engineering degree in Trinity College though it is to have as much relevance to his future as an old copy of Byte magazine.(Incidentally, “I used to get Byte magazine for a couple of years when I left college and started playing music, really just to pacify my father who thought I'd be losing touch with what I had studied”, he says.)

Along with Brian Crosby, Damien Rice, Dominic Philips and later, Dave Geraghty, he starts a band known as Juniper deciding to make music in a house in the countryside. While others graduate from college hunting down the staple feed of a 9 to 5 income, Juniper are content to make music.“There were always ways around not having money. We've never been forced to go 'this isn't working, let's not do it'. It was a lot of fun. It was very intense after a while because it was pretty remote and we didn't get to see many other people sometimes from week to week, and you're living together, working together, socialising together.We were there for a year and I don't think it would have been healthy to stay any further.”, he recalls.

So Juniper came to pass.

Paul Noonan never thought of it before. Juniper became BellX1 and yet his first musical home was an orchestra without strings.“I was a flautist in the Lucan Concert Band for a few years when I was 9 or 10 and then I played drums with them.It was great in that I could read music, especially playing drums you rarely get to be disciplined and get to read drum music, which is quite a different thing to regular music.I've tried to learn the piano in the last couple of years which has been really fuckin' hard. I think the younger you are when you start something like that the better it is.”It's hard to imagine the piano being a huge difficulty to him now at 31, when at 14 he had already started writing his own songs.“I would have started writing songs when I was 14 or 15”, he says. “I've always loved music. And I suppose I've always loved writing music. Initially just being able to play things I used to make on an acoustic guitar that would have been in the house.”

He was never pushed into music by his parents. Home brings back memories of his Dad's musical deeds..“My father always sang. He always sang on occasions and he'd always go to great lengths to learn songs. In the summers he used to teach the Italian and Spanish students that used to come and stay in the area and he'd teach them things like, I Still Haven't Found What I'm Looking For and There Is An Isle, which I believe is a big Limerick rugby song. It used to be a surreal thing to see a big group of foreign students singing There Is An Isle!”Noel Noonan is still the principal of Lucan Boys National School. “He has a couple of years left in him yet!” Paul says.

After primary school in Lucan and summers spent on his grandfather's farm in Limerick, Paul moved to secondary in Salesians, in Celbridge. How he came to pursue an Engineering degree now that he is a musician is not such a strange conundrum when he reveals a love for maths, applied maths and physics.
His love of music was inculcated by a new bunch of friends, who referred albums to him from their older brothers. Paul couldn't return the favour, being the eldest in a family of three girls and one boy.“Music was never a hobby, it was just something I always enjoyed doing and thankfully it's become what I do, which is nice.” His first songs were penned while he was a teenager.“I don't think they were very good. I would have had my favourite writers and bands and stuff and I heard a couple of them [his own songs] recently and they're very much modelled on certain songs that I would have liked at the time. And it wouldn't necessarily have been something that needed to be expressed in song; it was just the act of writing a song that was exciting. For so long it seems like this abstract thing that other people do and then when you get an inkling that you can do it yourself it's kind of exciting.”

“I think there was very much a burden lifted off all of our shoulders when Damien left”, Paul says of the split which brought to an end their time in Ardclough, and the death of the band in its guise as Juniper.

“He's [Damien] a strong personality. He had a big influence on the way things were in Juniper. It had been kind of fractious for a while and we had been a lot more volatile a unit as five and our journey was very much at the whim of where his head was at. So it became a lot calmer and more functional.”Damien Rice departed but it still felt good among the other four to continue to make music. BellX1 were christened.But it wasn't so much a baptism. Both the band and Damien continued to use material from their earlier days. Volcano appeared on O (Rice) and Neither Am I (BellX1).
“I really like our version of Volcano. I heard it the other day. That whole record we were in a very different place, musically, it was very brittle.”

“Music has always had the power to bring you back to a place in your life vividly, more so than any other sense. So it brings me back to happy days of recording that record. I don't really have any objective opinion about the music anymore”, reflects Paul who was now the lead singer.“Specifically at that time, Brian and I would have written as a pair in a way that no other pairing did I think. He would have never written lyrics. It was a communication that was musical, it never would have been a verbal one”, he says of that period.

Does he ever listen to the record now?“I'd hear it occasionally. I would listen to certain songs. I often listen to it when I'm drunk”, he laughs. “When I come home drunk I like listening to our own music because maybe I'm too self-conscious to do it otherwise or I worry about it.Sometimes when you snatch a hearing of it in a shop or restaurant or something and it can sound wrong, either too slow or out of tune and you hear all these cracks in it. I can also be really happy with things, like I tend to be pretty positive”, he says as though suddenly conscious that he might be coming across as a dour and doleful.“From the very early stages of recording when I feel a recording has something I'd be the one to get really excited about it and I'd want to fiercely guard what I'd see as its quality because sometimes I feel that what we do to stuff after we initially capture something is too its detriment!”Music in Mouth was their second album and whatever concerns Noonan had about alterations made in the studio might have been tempered by critical acclaim and popular support in Ireland.