If you’ve set your sights on visiting Italy this year, but want to avoid the standard tourist traps of Venice, Florence and Rome, here’s a list of five beautiful and often overlooked cities to visit. All are easily reachable, and have a lot to offer. 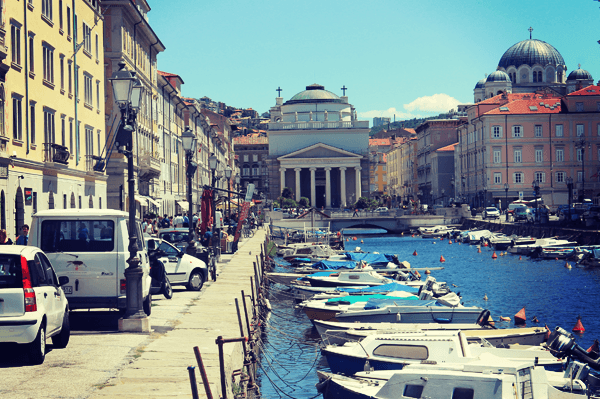 Just over two hours by train from Venice, Trieste is an incredible city with a very unique character. On the border with Slovenia, and historically an international city that was the Austro-Hungarian Empire’s main port, Trieste has been listed by Lonely Planet as not only one of the most overlooked Italian cities, but also one of the mostunder-rated destinations in the world! It was where James Joyce wrote much ofUlysses, and was home to both Italo Svevo and Umberto Saba. For much of the cold war it was on the border between East and West, and its convoluted history has led it to be described by the New York Times as ” like a modernist novel — complex, layered, ambiguous.”. And if all that doesn’t convince you that it’s worth a trip, it’s also the proud possessor of one of Italy’s most dramatic squares, Piazza Unità d’Italia, which is enclosed on one side by the sea.

Perugia, the capital of the Umbria region is a marvelously lively city,thanks to its university (which includes large amounts of visiting students from all around Europe and the US), and its famous summer jazz festival. The city is beautiful, set on a high hilltop sprawling into the valleys, and has a rich architectural and cultural history. It’s home to Perugina – Italy’s most famous chocolate maker, and close by is the famous lake Trasimene, site of the bloody battle of Trasimeno during the Second Punic War, when Hannibal created the largest ambush in military history! Nowadays you can drive out to various villages along the lakeside and eat fresh fish and amazing fried food.

Rimini is certainly not overlooked, at least by Italians – its the #1 summer destination for many Italian families thanks to its miles of sandy beaches and welcoming culture. It is less well known, though, amongst English speaking tourists – in part because of its unfair portrayal as simply a beach resort. In truth the city is a vibrant hub set between the sea and the hills. Founded by the Romans in around 268 BC the city has a wonderful old town, and is also home – during the summer – to some of the biggest free festivals in Europe, in the form of the Notte Rosa and theMolo Street Parade. Add to that some of the best food in Italy, at prices that won’t make you wince, and you’ve a great destination.

Sicily’s second city, and one of the main ports of the Mediterranean, Catania is one of my favourite cities in Italy. Set at the foot of the daunting volcano Mt. Etna, thecity centre is built in characteristic black lava stone. Catania has a long and varied history – originally founded as a Greek colony, it has been ruled by the Romans, The Vandals, the Ostrogoths, the Normans, The Arabs, and the Spanish – all leaving their own imprint on the city’s culture. It’s magical, mysterious, and has some of thebest food in Italy (and thus Europe!). It’s relatively small, but there’s plenty to explore, including the various small towns that dot Mt. Etna

Kidding, right? Not at all. Sure, Milan is Italy’s financial and fashion capital, and one of the main entry points into the country, but many people – myself included – see the city’s high-rise skyline, congested traffic, and busy pace of life and immediately head for the train station (an amazing building to see in itself). The truth is that Milan hides many of its charms well – but this year, more than ever, with the huge Expo 2015 taking place, it’s a great time to search out the delights of this city. Obviously there’s the magnificent Duomo to see, and the city’s other ‘cathedral’ – the San Siro stadium. There are exhibitions, concerts, and events galore and the city has unbeatable nightlife.

sights to see: The Duomo , Da Vinci’s The Last Supper, The Navigli

This article was first published on LinkedIn