Tragedy is an extreme form of desire – Ken Harvey interview

As the years pass and one’s tastes refine, it’s increasingly difficult to discover a book, a film or a record that moves you profoundly. But every now and again it happens, and with authors you would never have thought of… For example Ken Harvey, a forty-year old debut-writer from Boston, gay and published by a ‘gay-oriented’ publishing house [Editor’s note: This is a reference to Harvey’s Italian Publisher, Playground], author of short stories with gay protagonists and/or characters, often adolescents. Read the first story and one is struck by the delicate touch, by the modesty, by the irony with which a man talks about his adolescence, by his complex relationship with his parents and in particular by his need for love. Continue with the second and you understand that the themes are like the best of David Leavitt, with his debut Family Dancing that for the first time in the ’80s uncovered gay sentiments and love, but also marital crises and the failure of a certain family model. We met the author, who also teaches creative writing, to discuss with him his strange characters and the inevitable autobiographical element of a first work. 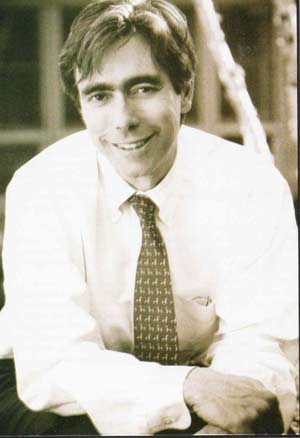 How were these nine stories born? How much of the material is autobiographical or pure invention?

In my stories there’s often something of the autobiographical, it’s not for nothing that I always go around with a notebook like this and when I hear interesting dialogue I take note. Often then from these fragments of dialogue my stories emerge. For example one of the stories in the book is based on two men that find an old postcard on which is written “Bob, if you were with me, everything would be alright (signed) Stanley”, and this is something that really happened: I found this postcard, that I have at home, in an old second hand book store. But I constructed this story not so much on the postcard as on the diverse reactions of the two men to the postcard. One reacts very romantically, while the other in a much colder mode, more rational. I did the same thing with some moments from history that particularly impacted on my life, take for example The Last Warm Day in which there’s the exact description of the reaction that my father had to the announcement of Bobby Kennedy’s death. The scene in which the child and his father, together in the car, make a U-turn and head home to watch the Today Show is exactly something that I lived through. Also in Tipping Cows the importance that the Watergate scandal assumes and the pages in which the boy watches with his mother all the Watergate hearings and impeachment process on TV is something that really happened, so in a certain sense I take historical facts and bring them into the stories. There’s a common phrase amongst writers that act: I write what I know. In reality I try to write that which I know in my heart, that is my emotional and sentimental reality, but at the same time through my writing I’m searching also to know the unknown; I like to write of things that I don’t know to analyse them, to be able to know them, to penetrate them.

Why did your Italian publisher change the title of the collection to Ragazzo di zucchero (Sugarboy)?

The original title was a lot longer, but it was a title that was all-embracing of my way of looking at life: If You Were With Me Everything Would Be All Right, that is if I had love, everything would be beautiful, everything would be great. But in effect it’s not like that, there’s this sense of incompleteness, of something missing. Andrea [Bergamini, Editor of Playground] thought Sugar Boy, which is a title of another story in this collection, would be more catchy for an Italian public, and convey more easily the idea that in this book there’s a lot of cruelty and suffering, but also a lot of sweetness.

Even though it’s treated with extreme delicacy and irony, a leit-motiv of these stories is the theme of grieving, of death. Why? Does Autobiography play a part here as well, the death of friends from AIDS and suchlike?

Obviously in this choice there are some autobiographical elements: for example in one of the stories there’s a character that has suffered a stroke and is in a wheelchair, paralysed, and in fact I decided to write this story after one of my friends had a stroke, to understand how someone in a wheeelchiar would feel. I focus a lot on tragic situations, like death or debilitating illness, precisely because it interests me to talk about how people react to tragedy, about how one manages to find a sense in life even after events like these, and how from tragedy the smile is born, and so there’s always a very, very thin borderline between the two things. There’s also a sort of desire in all these characters, sometimes a dramatic, exaggerated desire, at times a desire for the simpler things, the normal things close to us. So, for me tragedy is an extreme form of desire.

Reading your stories, Family Dancing comes inevitably to mind. I believe that Leavitt is one of your contemporaries. What effect did it have reading a book like that twenty years ago?

The first thing that I read by David Leavitte was a short story published in the New Yorker in 1980. For me it was a hugely important experience that I can’t judge as a critic: it was the first gay short sotry that I read, the first time that I saw my reality told with my language. Up until that point, when I read a book by a heterosexual I felt like I had to translate the situation, the loves, the heterosexual reality into my reality, into my way of living love, and this was in a certain respect tiresome. For the first time instead with Leavitt I found myself face to face with my reality, with my life, with my language, I didn’t have to make this effort to mediate. It was such a beautiful and particular experience that I can’t judge it from a critical or literary standpoint.

In the story Mister Bubble, I love you the mother of the protagonist is a psychologist that likes to define herself as a ‘regulator of life situations’. Is there a bit of sarcasm in this definition?

All the story is dedicated to that type of liberal ’60s character, that we call hippies, but in reality are only by name, because when they have to face reality, like the coming out of a son, they certainly don’t respond positively. I live in Cambridge (Massachussets) which is a small community of free spirits, in theory very open, very liberal, very intellectual. But every now and then I step back and look from the outside, and see it as a parody of itself. In this story I wanted to talk about this type of character that claims to be open and broad minded but when they have to confront reality are much more conformist than they claim to be.

One of the things that is striking about your writing is the rythm, the ease with which you mix dialoge and narrative, and the capacity to condense everything, even an entire adolesence into ten pages, for example in Tipping Cows. Where did you get this style from? Cinema, literature, writing courses?

I prefer to write dialogue because it allows me to not comment on what happens to my characters, and to let them talk for themselves, they behave almost autonomously. I’m definitely very influenced by the theatre and the cinema, above all by romantic comedy, which is a very undervalued genre and which in fact reguires a huge amount of chiselling or scupture, of cleaning dialogue. In a romantic comedy dialogue has to be exact, it has to try to seem as natural as possible, but also to say and mean as much as possible: it’s similar in a way to what I try to do with my dialogues, make them dry but efficient. The problem that I think I have is that I work too much with images, given that for a period I worked as a director in the theatre. Often my prose is a bit too like a sketch, and I try to work through until the non-dialogu
e parts of the story don’t resemble directors notes from a theatre script. A lot of my passion for dry prose comes from Carver, who was magnificent for his capacity to write stories where adding one more word would be too much. I’m not trying to, nor do I want to, follow the style of Carver exactly, but this particular trait is something I’ve definitely taken on board.

if you were with me, everything would be all right by Ken Harvey is published in the United States by Pleasure Boat Studio, a Literary Press

The book is also published in Italian, under the title Ragazzo di Zucchero by Playground publishers.