The making of a monster – Mary Shelley’s Frankenstein

“How can I describe my emotions at this catastrophe, or how delineate the wretch whom with such infinite pains and care I had endeavoured to form? His limbs were in proportion, and I had selected his features as beautiful. Beautiful! – Great God! His yellow skin scarcely covered the work of muscles and arteries beneath; his hair was of a lustrous black, and flowing; his teeth of a pearly whiteness; but these luxuriances only formed a more horrid contrast with his watery eyes, that seemed almost of the same colour as the dun white sockets in which they were set, his shrivelled complexion, and straight black lips”.
[Frankenstein by Mary Shelley – Chapter 5] 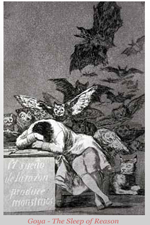 How do we make monsters? These are creatures of the imagination that repel on almost every level. They come to where we live, threatening us in both our mortal security and indeed our very cognition. Mary Shelley’s creature is described as wrong in every sense and potentially dangerous. His yellow skin stretches inhumanly over his arteries and produces a “shrivelled complexion”. He is fundamentally ugly. This goes along with countless descriptions of the ‘monster’ in art and literature, being the most fertile breeding ground for the creation of monsters, which are almost always categorized as ‘things’ firmly on the outside – things which are ‘Other’ and satisfyingly evil. Mary Shelley’s protagonist Victor Frankenstein has meddled with the natural order by creating life from death (the monster is pieced together from parts of corpses both animal and human). He is an abomination. The author, like many artists before and after visually supports this by attributing her monster with abnormal height, and repulsive features. There can be no communion between ‘us’ and ‘it’. Yet monsters are rarely this easily or neatly codified . Art would be fairly uninteresting if this were the case. They are the best exemplars of grey areas simply because they have their very origins in abstraction. They come from our need to actualise the essentially formless, and so an aesthetic tension is born. How do we explain, for instance, the ‘beautiful’ features , the ‘lustrous black’ hair and his ‘pearly white teeth’? Our visuals of Lucifer himself come from a similar ugly/beautiful paradox. This conforms with the canon, so much as we can see it in monster design. Goya’s demons for instance were obviously ‘ugly’ while at the same time attractive, which is most obviously realised in the Sleep of Reason Produces Monsters (1797/98). Here, the creatures rise from the sleeper almost lyrically in their flow. The same goes for William Blake who in his depiction of Pestilence: The Death of the First -Born of c. 1805, illustrates the beast in terms of a confusingly delicate, ballet- like pose, and sporting a rather serene expression. There appears an irresolvable yet indispensable argument between the hideous and the beautiful. Monsters are never simple, and so are often designed in contrasts such as the abnormally large set against the innocently small, the dark against the light and so on. This notion of visual ambiguity is crucial in the creation of Frankenstein’s monster who in many ways is as pieced together from aesthetic myth as he is from dead bodies.

In the following discussion, I want to focus on Frankenstein’s monster, and more specifically, how the character is visualized in design. I will argue that its representation lies in its essentially abstract nature. With this in mind, I will trace some of the image changes in the monster from Mary Shelley’s Frankenstein, or The Modern Prometheus of 1818, to James Whale’s film adaptation of the story. Within this, I will also touch upon briefly some of the near contemporary adaptations such as Richard Brinsley Peake’s play Presumption; or The Fate of Frankenstein of 1823 and Peggy Webbling’s play Frankenstein, an Adventure into the Macabre of 1927. Central to this will be some important aesthetic issues of the Romantic era, set against those of the 1920’s and 30’s and the earliest experiments with this subject in film. Why are these variants on Shelley’s monster so different in their visual incarnations? Her description is not ambiguous and certainly works in capturing the audience’s attention, yet it is often left behind with radical changes to the face of the monster.

‘…no passion so effectively robs the mind of all its powers of acting and reasoning as fear’. 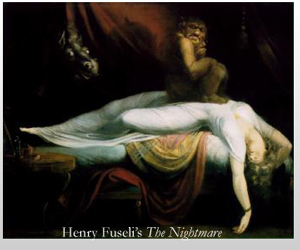 Shelley’s novel is in many ways typical of the Romantic imagination. The nineteenth century was an era in which the notions of the ‘aesthetic’ and the ‘imagination’ became autonomous. The individual self was key and contrasted itself consciously against the cool rationalism of the enlightenment. Reason was thus replaced largely with the irrational, and it was the terrible visions of the mind which that were utilised with new vigour. This is most true of expression in literature and in painting. Tales of terror and ghosts gained a new centrality and can indeed be witnessed in the genesis of Shelley’s novel. Conceived during a thunder storm overlooking lake Geneva, Mary and her husband-to-be Percy along with Dr. Polidori were encouraged by Lord Byron to each write a ghost story. This environment naturally gave a new impetus to Terror as something to be probed and enjoyed . Shelley wanted to create a story which “would speak to the mysterious fears of our nature, and awaken thrilling horror”. The emphasis is on the supernatural, death and the pleasure of creating something savage. The Romantics loved the idea that some things were inexplicable and essentially irrational and so artists and writers alike took extra pleasure in depicting scenes which pointed toward the frightening or otherworldly. Further to this, was the leaning toward the mystical and the fantastic. We can literally see this in the first illustrated edition of the novel engraved by W. Chevalier (1818, after Theodor Von Holst): set in a medieval castle “strewn with skulls and a skeleton and illuminated by a weird lunar efflorescence” and with a theatrical effect created by Frankenstein’s face, up-lit and melodramatic. Also implicated in this was a preference in style for a kind of decadence and implicit sexuality in the image. This is most striking in Henry Fuseli’s The Nightmare (1781). The scene is realized in outrageously sensual baroque swirls and curves as it shows a sleeping woman draped over the bed. There are phantasmagorical monsters around her in the shape of a devil perched on her breast and a dark horse emerging from the shadows behind. The horse appears to evoke the legendary ‘Mara’ (the devil’s horse) and stares out at us almost blindly with glowing ghostly eyes. The devil on her chest is also smirking suggestively indicating evil’s reign over innocence (further implied by the pure white night dress) underlining once again the almost primordial power of terror and the imagination.

I have insisted on this painting for the reason that Shelley herself had most likely seen it or at least heard of it, as it caused a sensation in London particularly. The image of the woman on the bed seems in fact to be directly mirrored in her own novel, as the monster enters Elizabeth’s bridal chamber:

“…she was there, lifeless and inanimate, thrown across the bed, her head hanging down, and her pale and distorted features half covered by her hair. Every where I turn I see the same figure – her bloodless arms and relaxed form flung by the murderer on its bridal bier. Could I behold this and live?”
[Frankenstein – Chapter 23]

Shelley’s monster thus continues Fuseli’s own visual code contrasting innocence with corruption. This is especially relevant given that the monster has penetrated in more ways than one into the bridal chamber. The monster is an agent of transgression. He has already crossed the mortal frontier in his very existence and added to this, is the suggestion of his forming a sexual threat to the (presumably) virginal Elizabeth. It can certainly be no accident that the encounter takes place on Victor and Elizabeth’s wedding day. This is also carried over in his physical image which itself defies natural categories. Victor designs his creation to be over seven feet tall, with extremities “proportionably large”. This is added to the not incidental fact that the creature is in a sense both dead and alive. He constitutes most fully what it means to simultaneously repel and attract. The idea of an essentially dead man walking (in possession, possibly of some secrets of the grave, a mysterious lustre) is added to his being proof of scientific progress which not only echoes contemporary fears surrounding the Industrial Revolution but also flies in the face of Christian Doctrine. The life ‘spark’ or soul has been replaced by galvanism, by the intellect and progress of man, thus giving ‘birth’ to Victor’s special project. This, along with proto-Darwinian issues (Erasmus Darwin, Grandfather of Charles, had already achieved some notoriety with some of the first formal theories of evolution in 1794 with the publication of Zoonomia, or, The Laws of Organic Life) surrounding evolution and man’s relationship to God feeds wholly the Romantic appetite both philosophically and aesthetically.