A lot of people are cynical about the sexual revolution. Most acknowledge that the new set of sex and dating rules has produced ‘confusion’. Some go so far as to label it ‘anarchy’ that will ‘destroy society’. We are told that women can have sex like men if they want to – that consenting adults can do what they wish – but too often the ‘slut’ stigma remains, even in liberal-progressive circles. Many will pay lip-service to liberation, then turn like a pack of wolves on any woman who actually tries to enjoy herself. ‘Speak out about freedom’ the message seems to be. ‘But for god’s sake… don’t exercise it!’

You’ve got to wonder about some of the motivations. Anyone who’s hung out in a nightclub (or a foreshore on New Year’s Eve) knows that ‘slut’ and ‘fat’ are the favourite insults leveled by jealous girlfriends at the target of their man’s lust (after they catch him perving).

Guys also tend to wield the S word most viciously in moments of darkness and insecurity. ‘I’ve always thought “slut” means “she will sleep with everyone but me”’ says a friend of mine.

That word made the papers when a wave of Slutwalks swept across the globe. Elderly people crossing? Ducks crossing? For a while it was SLUTS crossing: bold-lipped, cleavage-bearing, fishnets-clad and (probably, in at least some cases) vajazzled. Police walked like slack-jawed dates behind the throngs of angry women. Areas were cordoned off. Cities and municipalities accepted the event as a legitimate protest and warned commuters of possible disruption, stopping short of erecting SLUTS CROSSING signs, complete with buxom silhouettes (though that would have been hilarious).

‘It’s my hot body’ one outraged brunette scrawled on her placard ‘and I’ll do what I want with it!’ They came, they saw, they conquered. Above all, they CAME. Or they claimed their right to – without shame or fear. They strutted, they hollered, they dressed like what are referred to (unkindly) in rap music videos as ‘hos’.

There is reason to be cynical: we have skyrocketing rates of date rape, slut-shaming, victim-blaming, a ‘pornified’ ideal to which young women feel they must aspire and (last but not least) a very angsty cohort of men who didn’t get laid as much as they thought they would in a sexual free market. Corporations have – of course – found a way to capitalize on almost all of this fallout, churning out sexualized music videos here and flogging books like The Game (purporting to teach unlucky lads how to score) over there.

Many say Martin Amis is a writer well past his prime – that with the glory days of Dead Babies and Success and Money behind him, he has become a reactionary cliché. 2009s The Pregnant Widow will certainly alienate those feminists who argue that sexual liberation (catalyzed by the introduction of the contraceptive pill and lovingly tended – like a very naughty garden – by student activists en masse in the nineteen-sixties) was an unequivocal victory.

Feminism socks each of Amis’s seventies women in a different place: across the cheek, in the heart, in the psyche.

‘It’s astonishingly difficult to find a decent deal between men and women’ says Amis. ’[A]nd we haven’t found it yet.’

The books title is an allusion to a quote by Russian writer Alexander Herzen, who said that all revolutions produce a ‘pregnant widow’. It’s not that the old order is overturned and a new one appears – voila! – quicker than you can rip off a mask. Rather there is a period of adjustment. The dead father leaves behind a pregnant widow, not an heir. The child (new order) still needs to be born. It needs to grow up and find its feet.

In 2007 Amis said that feminism ‘is still in its second trimester… I think it has several more convulsions to undergo before we’ll see the child’.

The Pregnant Widow is set in the seventies and chronicles an ‘erotically decisive’ summer in the life of Keith Nearing (obviously based on Amis himself – Keith studies literature at Oxford and gets his first job at the Times Literary Supplement). Keith – sensitive writerly type that he is – is ‘struggling to twist feminism and the rise of women towards his own ends’ (Young Amis probably did the same thing at all the best London literary parties, with no less than Christopher Hitchens as his wingman).

‘The sexual revolution,’ Amis says, ‘was the greatest social change I lived through. It was a tremendous break with the past. You could feel it in the air. You knew something was happening. It was scary and intoxicating and definitely new. Suddenly you felt all these restraints were lifting and you were wondering how you were going to navigate this… [it was] the girls [who] had to make all the difficult choices. And the girls suffered and some of them got a bit twisted out of shape. It was a very difficult manoeuvre for them.’

The book has a ‘comedy of manners’ feel to it. For a book about sexual liberation it is rather uptight, full of the famous Amis etymological asides:

‘Gloria Beautyman filled him not with feelings so much as a set of impulses. The impulses of the raptor. From L., lit.: “plunderer”, from rapere “seize”.’ p.372

People love Amis for his attention to detail – blink-and-you’ll-miss-it displays of erudition are his trademark – but this gets a bit much. It adds nothing to the story, and you start wishing Amis would slot this stuff in a footnote, or an educational coloured box in the margin.

In Amis’s defence, the character is a literature student. When Keith is not ogling the girls by the pool he is reading the works of D H Lawrence and Jane Austen, musing to nearby babes about the changes in sexual mores since (say) Austen’s time. Keith is also (this is one of the main points of the book) terribly insecure, unsure where he fits in this heady new world where ‘girls behave like boys’. He is hyper-aware of his height (‘in that much disputed territory between 5’6 and 5’7’), technique, number and quality of conquests, physical proportions etc. etc. ‘There’s nothing ridiculous about a big cock’ a female friend tells him, rather insensitively, when he is feeling jealous one day.

Yet next to the gym-crazed, Game-reading young men of the 2010s, Keith and his anxiety seem rather tame. I kept thinking again and again as I read The Pregnant Widow that Amis’s message would have hit home more powerfully with a novel set in contemporary times, or perhaps something jumping between eras. The Pregnant Widow can be so subtle its point is uncertain. Amis has chronicled the first trickles of something that would eventually become a torrent.

An aspiring poet, Keith tries to place himself in the pantheon of the greats, and comes up not so-great:

‘What kind of poet was Keith Nearing, so far? He was a minor exponent of humorous self-deprecation… He wasn’t an Acmeist or a surrealist. He was of the school of the Sexual Losers, the Duds. The Toads…’ p. 401

“All you need is one pretty girlfriend and others’ll follow” someone assures the hapless Keith on page 400. But the girls have their own problems: Gloria Beautyman is trying to live down some mysterious disgrace. Buxom Scheherazade (the object of Keith’s lust) is dizzy from the attention she receives, trying to cope with a revolving door of flaky suitors. Sensible Lilly cannot keep her man’s eye from straying, and most tragically, Violet (based on Amis’s own sister Sally), cannot keep her pants on or her head together.

Violet is the kind of girl who ‘rapes fruit and dates football teams’. Keith and brother Kenrik ponder her situation on page 387, with Keith speculating that maybe she is just ‘a healthy young girl’ with normal impulses. This notion is dismissed instantly: the brothers agree that ninety-two boyfriends is ‘extreme’.

‘She acts like a very bad boy… We’ve got to make her act more like a girl’.

The brothers fail. By page 423 Violet is in the common room of the Church Army Hostel for Young Women, ‘a silenced girl among all the other silenced girls, and wearing an enormous and very black black eye’. She gets married but divorces after ‘fucking’ not one but ‘all the builders’ who come to work on their home. By page 445 she has had a child, but the girl is taken away by social services. On page 453 Violet dies, and the doctor speaks of a ‘failure cascade’: a fitting cause of death for Keith’s manic, battered sister. 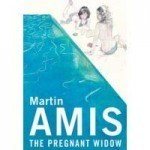 Violet’s failure is the most spectacular of all the babes in Amis’s book, but it represents just one way to be a victim of the sexual revolution. Feminism socks each of Amis’s seventies women in a different place: across the cheek, in the heart, in the psyche. Both Gloria Beautyman and Lilly end up divorced. Scheherazade retires to the suburbs, loses her looks, refuses to grow up. Sturdy Rita, who hoped to have ten children (‘one a year’), breaks down when she explains why it never happened:

‘I sort of forgot to… I just seemed to miss it.’

Keith muses that he ‘quite often met women … who just seemed to miss it.’ The book ends with a lament on those ‘extremists and self-destroyers’ who do not know how to manage their freedom, who ‘can’t stand another second in heaven’.

The book can be dry (the New York Times called it ‘remarkably tedious’) and this shouldn’t have been the case: the subject matter (especially Violet) is close to Amis’s heart. The writer caused a stir on his promotional tour, making a series of inflammatory statements including ‘the sexual revolution helped to kill my sister Sally.’

According to Amis, his sister Sally (basis for the character of Violet) ‘…really had the mental age of 12 or 13 and I think she was terrified. I think what she was doing was seeking protection from men, but it went the other way, she was often beaten up, abused and she simply used herself up… She died at the age of 46, not of anything sudden; she was one of the most spectacular victims of the revolution.’

‘It would have needed the Taliban to protect her’ he added.

Amis acknowledges that the book will ‘get him in trouble with feminists’ but says: ‘It’s a very feminist book. They haven’t got a case.’ He insists: ‘Women can’t rise far enough to suit me. I’m a gynecrat – I’d like rule by women.’

Reading the controversy about Sally Amis (confined largely to the British press) was what made me want to read The Pregnant Widow; in fact, the book itself was a bit of an anti-climax. But Amis has started an important debate, saying a lot of things many writers would be too terrified to say. Controversial atheist, Iraq-War-supporting mate Christopher Hitchens (may God certainly not bless his soul) would be proud.