50 Places You Must See in Ireland

The Powerscourt Estate is a favourite excursion for Dubliners, located just 20minutes outside Dublin in picturesque County Wicklow. The estate includes the Powerscourt House, built between 1730 and 1741 – a magnificent Italian style villa which has been ranked in the top 10 houses to visit in the World (by Lonely Planet). The House is surrounded by amazing gardens, ranked #3 best gardens in the world by National Geographic. As if all this wasn’t enough, nearby(5km from the main estate) there is the beautiful Powerscourt Waterfall, Ireland’s highest waterfall (121m).
Official Site 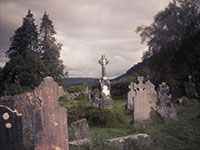 Glendalough, located in the Wicklow Mountains National Park, offers spectacular natural beauty and a glimpse into the history of Celtic Christianity, with the monastic city of St. Kevin. Glendalough means the valley of the two lakes, and stretches 3km between the Wicklow mountains. It was here that, in the 6th century, St. Kevin set up a monastic settlement – the ruins of which today include one of Ireland’s most iconic round towers.
Official Site

Coole Park was once the home of the famous dramatist Lady Augusta Gregory, who along with W.B.Yeats founded the Abbey Theatre. Her home in Co.Galway, with its beautiful gardens became a focal point for the Irish Literary Revival. Writers like Yeats, George Bernard Shaw, John Millington Synge and Sean O’ Casey all spent time here. Today’s park includes 7kms of nature trails through woods and lake – the scene of Yeat’s celebrated poem The Wild Swans at Coole.
Official Site

Just outside New Ross, Co. Wexford, is the beautiful John F. Kennedy Park & Arboretum, commemorating the assasinated American president, whose family originally emigrated from Wexford in 1848 (during the Great Irish Famine). The Arboretum itself is a plant collection of international standing. It covers 252 hectares (623 acres) on the southern slopes and summit of Slievecoiltia.
Official Site 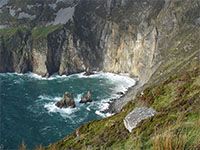 Slieve League in rugged Co. Donegal is less famous than the Cliffs of Moher, but is actually three times higher (at 601 metres). The cliffs offer spectacular views of the Atlantic, the Sligo Mountains, and Donegal Bay. The site itself is undeveloped, offering just a car park, though there is an excellent privately run Slieve League visitor’s centre Ti linn nearby.

In 1930, a local schoolteacher, Patrick Caulfield, while digging peat, uncovered a pattern of rocks in the boglands of the Céide Fields, near Ballycastle in Co. Mayo. The discovery would be one of the largest and most important stone age sites discoved in Europe, with experts dating back the fields settlement as far as 6000 years ago. The Interpretive Center won Ireland’s Building of the Year Award when it opened in 1993.
The Céide Fields are on the tentative list for inclusion in the UNESCO World Heritage Sites.
Official Site

The Clara Bog in Offaly is one of Europe’s best preserved raised bogs, and the visitor’s centre here affords you a rare opportunity to enter into this very particular habitat with its wide range of protected wildlife and plants. There is a 1km looped boardwalk which allows visitors to safely enter into an area that preserves ten thousand years of history.
Official Site

Waterford city is claimed as Ireland’s oldest city, established by the Vikings in 914 AD (The name Waterford comes from Vadrefjord, or ram inlet). It has a long and important history, and is perhaps the best place in Ireland to visit Ireland’s viking past. The Viking triangle includes the city’s award winning Medieval Museum (including the finely preserved Chorister’s Hall), and Reginald’s Tower which houses a treasure trove of Viking artifacts including a full set of weapons from a Viking warriors grave (the only set to survive in Ireland).
Official Site

The Titanic Experience in Belfast is one of Ireland’s newest and most popular museums, offering visitors a chance to learn about, arguably, the World’s most famous ship and the city and shipyards where she was built. The Museum has nine interactive galleries and an award-winning walking tour. The museum is housed in a striking building, nicknamed locally as the Iceberg – in the shape of the ship, and covered in 3,000 individual silver anodised aluminium shards.
Official Site 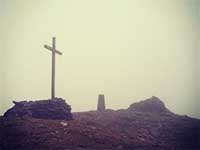 Mt Brandon, the highest mountain on the beautiful Dingle peninsula (which is worth a visit in its own right, for amazing scenery, great music and craic), is named after St. Brendan, one of Ireland’s twelve apostles (and the man who, according to some, was the first European to discover America during his voyages in the early 6th century). The mountain, set on the edge of Europe, has a dramatic presence and is part of a popular Catholic pilgramage route, the Cosán na Naomh (“The Saints Road”) which starts at Kilvickadowning and ends on Mt Brandon’s peak. American writer and journalist Chet Raymo dedicated a book on early Celtic Christianity to the mountain, and its one of the best places in Ireland to come into contact with that particular spirit.